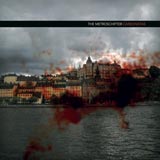 Metroschifter are at their best when they speak with their instruments, not their mouths. With their first record since 2000, the Louisville rockers pound forward with eight furious tracks built around mathematical precision. “America Is A Prison” flexes its muscle-bound energy, albeit nuanced. While craftsmen musically, Scott Ritcher’s lyrics leave much to be desired. “Murder” trudges along blandly with lines like Life is such a waste of time, choking the listener with rock-star angst. “It’s All Fucked Up in Dixie” quivers and rolls with instrumental energy but ultimately doesn’t have much to say, as Ritcher hangs onto the oft-repeated title like a life preserver. Regardless, these guys are having a good time: Countrified left-fielder “Knob Creek” brims with Hank Williams-esque gusto. It’s when they’re trying to surprise you that Metroschifter really shine.