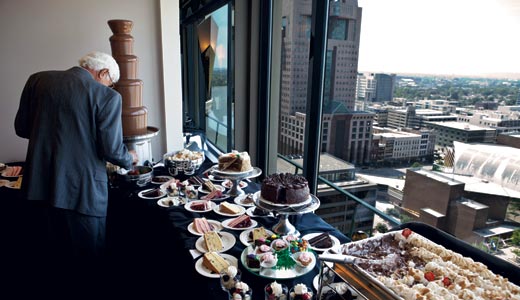 If you haven’t been up to the revolving top of the Galt House for a while, you may be surprised to see how much things have changed. Gone is the faux sailing ship look, with its blocks and tackles and green, purple and gold running lights.

Exit the elevators on the hotel’s 23rd floor now, and you step into a series of sleek rooms decorated in stark black and white. Light fixtures made from stacks of clear globes look like bubbles rising in champagne. But the real eye-catcher, as it has always been, is the lofty view of the Ohio River and the city all around.

When Rivue replaced The Flagship Room two years ago, the top-floor dining room highlighted a $60 million renovation of the entire hotel. We sent in correspondent Paige Moore-Heavin for dinner (LEO Weekly, June 7, 2007), and she found it quite good.

The other day, my wife and I made the ascent to check out Rivue’s take on Sunday brunch, a $21.95 all-you-can-eat deal. We took a seat in the middle of the revolving portion (seating is also available on more solid ground), and took in the buffets as we watched the city slowly go by. (The room rotates once every 40 minutes or so, by my count, so even a quick brunch should allow more than enough time for the full show.)

Our server gave a very nice recitation of the day’s specials, but for some reason, about midway through, she turned away from us to look at the buffet tables, giving us a good view of the back of her head. In the noisy room, we couldn’t hear a word she said.

Never mind. It was easy to figure out. Several tables provide a decent variety of brunchy goodies, although — except for the lavish dessert spread — it’s a bit short of the expansive spreads you’ll find at some of the city’s more extensive buffets.

Omelets and waffles are made while you watch. Line up at a window to get them, then doctor up your waffle, if you wish, from a table with whipped cream, berries and the like. My cheese omelet was nicely made, although the shredded cheese filling looked a lot like the stuff that comes on your taco at Taco Bell.

Among highlights, the Asian-style salmon was served with julienne veggies in a sweet teriyaki-style sauce. Pork Marengo consisted of thin tenderloin medallions in a variation on the classic chicken dish allegedly first served to Napoleon after the Battle of Marengo, made with a commandeered chicken and the few ingredients the chef had in his saddlebags — black olives and mushrooms. Beef pot roast had been long-braised until falling apart in strings, but its beefy flavor was good. The chef left my cheese omelet in the pan until it cooked dry. I would have been happy if he had plated while it was still creamy.

Toward the end of our meal, a server brought around a basket of small, warm, sugar-glazed croissants. It was probably more than we needed, but they were tasty tidbits.

The dessert bar is so long that it bends around a corner in an L full of calories; in the corner, a “chocolate fountain” in the shape of a gigantic chess pawn turns quickly, spinning down a curtain of liquid Hershey’s-style chocolate sauce. Reach in with a piece of fruit or angel-food cake and pick up an instant chocolate coating.

We weren’t quite too full to check out a three-layer mousse cake and a slice of coconut cake, both of which more than passed muster.

With tax and coffee, brunch for two was $43.90. Tipping at a buffet is always up for debate, because you do most of your own table-running, but our service was attentive, courteous and helpful, so we threw in 10 bucks anyway. —Robin Garr

Another reason to love El Tarasco? Unbelievable, but true

I love El Tarasco’s St. Matthew’s property. I go there for lunch several times a month with my friend and business associate Jerry, and we’re never let down — when it comes to quality Mexican at a great price, it’s hard to beat. The chicken tacos are ridiculously good.

Recently I was there with my buddy Fred, and he pounced upon a new menu item called tacos al pastor ($9.99). I tried a bite or two of his order and was immediately hooked. Not that my chicken soft tacos weren’t delicious, all stuffed with fresh, tender pulled breast chicken, lettuce and enough Chihuahua cheese to choke … well, a really big Chihuahua. But this al pastor stuff was that good.

So I went back a week later and got an order of my own.

The tacos al pastor is actually one of a number of new menu items at El Tarasco’s six locations around town, including three new seafood dinners — siete mares (seven types of seafood cooked in a soup), mojarra frita and camarones a la Mexicana — and four new lunch specials. When my friend Mia and I stopped in for lunch recently, I already knew what I wanted; she opted for the solid No. 7 lunch special of two tacos with rice (or beans) for a measly $4.99.

I wasn’t disappointed. Three double-wrapped soft tacos stuffed with marinated pork, onions and chunks of pineapple, along with huge portions of Mexican rice and refried beans, soon appeared before me. To top it off, the meal comes with a serving of fresh, chunky garden salsa and another flavorful salsa that tastes like a smoky red, roasted-tomatilla-style salsa infused with plenty of cilantro. It’s great poured into the tacos or greedily devoured with chips, and there is plenty to share.

The spices in the marinade are bold enough to be noticed, but not overpowering, and the pineapple chunks not only act as a tenderizer during the marinating process but also add a nice tang to the flavor mixture. In fact, the spices make each little morsel that drops from your tortilla (and trust me, plenty will) worth scooping up with your fork. The ingredients are grilled, fajita style, and the blackened edges only heighten the taste experience. Topped with the salsas, the tacos are a veritable mouth-gasm.

Sorry, am I gushing? The scary part is that while we were there, I observed someone at an adjacent table eating a cocktail de camarones (shrimp cocktail, $10.49) the size of a small bucket, topped with fresh avocado. I think I know what I’m getting next time. —Kevin Gibson