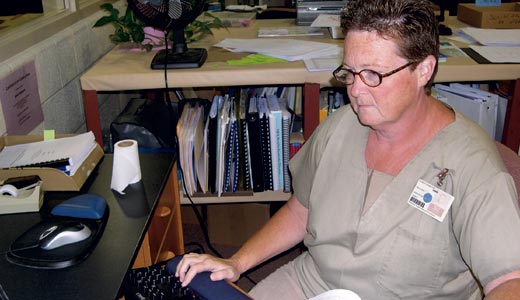 Karen Hampton sits behind a cramped desk cluttered with three-ring binders, manila folders and textbooks. The 46-year-old mother of two peers through a pair of tortoise-shell glasses as she methodically scans the text of a three-inch thick literature book, pausing occasionally to type a few lines on the keyboard in front of her.

Fluorescent lights illuminate the room, which is crowded with about 12 workstations similar to the one Hampton is occupying on this recent Monday morning. At first glance it looks like a typical 9-to-5 office, or perhaps a college computer lab, with most of the women too busy to look up from their work.

But these ladies are neither average career women nor conventional students — they are prisoners participating in one of the many educational and vocational opportunities offered by the Kentucky Department of Corrections. Thirteen inmates at the Kentucky Correctional Institute for Women in rural Pee Wee Valley take part in this program, which teaches participants how to translate written materials into Braille. It’s one of the more unique instructional opportunities available through the state correctional system, and Hampton has been involved since its inception at the women’s prison in 2000.

For Hampton and thousands of other Kentucky inmates, such programs provide a sense of normalcy and self-worth behind bars. But experts believe society benefits as well, suggesting prisoners exposed to classroom and career settings while incarcerated are less likely to return to prison upon their release, regardless of their crime.

“At first the program was very challenging, which was good because it kept me occupied mentally. It kept me from just thinking about the time I have to spend here,” says Hampton, who is articulate, yet soft-spoken, and whose auburn hair and freckles give her a youthful air.

Upon meeting this intelligent, mild-mannered woman, one would never guess her crime: In 1998, a Laurel County jury convicted Hampton of murdering her husband and sentenced her to 55 years in prison; she will be eligible for parole in 2017.

“I understand that society thinks of us as bad people, but this shows that just because you’re in prison doesn’t mean you’re not capable of doing good and helping other people,” says Hampton, who after completing an intensive Braille training and certification process, has translated materials including restaurant menus, history textbooks and maps. “It gives me a sense of feeling like something I’m doing in here is actually beneficial. It helps me not just think of myself as a number.”

When she is released, Hampton hopes to start a Braille translation business of her own: “I’ve put all my time and energy into this, and that’s one of the goals I’ve set for myself.”

Last year, nearly half of Kentucky’s 12,000 inmates participated in some sort of educational program, whether attaining their GED, taking college courses or enrolling in vocational training. It’s a promising percentage; however, many inmates never complete these programs.

During fiscal years 2008 and 2009, the state contributed about $647,000 — including federal grant money — to help pay for learning opportunities at its 13 state-run institutions. The inmate canteens operated at these facilities generated an additional $976,000 to support education among prisoners, according to Cheryl Million, a spokeswoman for the Kentucky Department of Corrections.

“Individuals that are being released after earning their GED and/or having taken advantage of the opportunity to learn a trade are less likely to re-offend,” she explains. “They are more prepared to find employment and support themselves and their families.”

An exhaustive study conducted by the U.S. Bureau of Justice Statistics reveals that 68 percent of state prison inmates never received a high school diploma, a staggering statistic that experts say proves crime and education are intertwined.

And just as a lack of education is likely a contributing factor to ending up in prison, studies show inmates who receive educational or vocational training while behind bars are less inclined to commit future crimes.

“If you don’t have an education and can’t get a job in the real world, that’s going to increase the possibility that you will turn to illegitimate or criminal means,” says Deborah Keeling, professor and chair of the University of Louisville’s Department of Justice Administration.

“Obviously prison should be about punishment, but it should also acknowledge the fact that more than 95 percent of individuals sent to prison will eventually be released,” Keeling says. “If we don’t do anything to change their behavior or to improve their chances of success outside of prison, then all we’re doing is creating a cycle of committing a crime, going to prison and being released.”