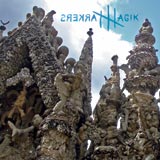 If you have any friends that are all like, “Yeah, Karen O’s totally awesome,” slap them upside the head with Magik Markers’ Balf Quarry. Elisa Ambrogio is quite the badass broad on their debut for Drag City. Unfortunately, by adopting a new direction for their widest exposure yet, best described as a cross between fuzz punk and angular electric folk, Magik Markers forfeit the mystique and visceral psychedelia they created on previous work such as (cheekily titled) Gucci Rapidshare Download and countless CD-R releases. While Magik Markers cultivated a sound more akin to noise artists like Indian Jewelry and Religious Knives, Balf Quarry showcases a blurred, lo-fi pop sensibility — a version of The Dead C as fronted by P.J. Harvey.

Sometimes they truly nail what they’re trying to do, such as the crusty, harmonics-happy “The Lighter Side of … Hippies,” the delightfully detuned “Ohio R” and the churning underbelly experimental pop of “Don’t Talk in Your Sleep.” While listeners new to Magik Markers may be enthralled by the amalgamation of ambience and attitude, those entranced by the cryptic, tribal leanings of the band’s past incarnation might feel left out.