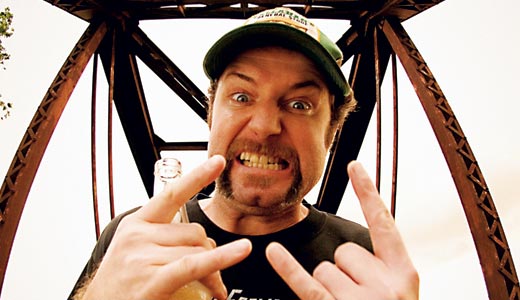 “I was just a busy man and a crazy man, so it was hard to get it all together,” he says of the delay. He accredits this sabbatical to a mixture of excessive touring, personal turmoil and his perfectionist attitude in the recording studio. “I put a lot of effort into the recording process this time,” he says. This is the third album he’s recorded in his home studio, which he says affords him the luxury of being picky.

Biram’s music is a smorgasbord of his favorite genres, including blues, punk and country. In addition to musical styles, Biram incorporates a variety of themes into his songwriting. On this album, each of the songs has a story behind it. “Still Drunk, Still Crazy, Still Blue” is about being drunk after a break-up while the other person has sobered up, and “Judgment Day” is a tirade against organized religion. The first track, “Hospital Escape,” is especially personal, as it contains real-life recordings of phone calls he made to friends while in the hospital, after his car was hit head-on by an 18-wheeler. He was residing in a military hospital and, in his drugged state, was confused by the men in military fatigues surrounding him.

“I was all drugged out on morphine in the hospital, and I didn’t have any idea what was going on,” he says. “I thought I was locked in a feed store behind enemy lines, and I was calling my friend to tell him he needs to get me out of there.”