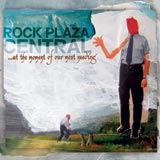 Rock Plaza Central will come up in your iTunes under the category of folk, the new kind that’s become more prominent the past few years. Equal parts post-rock and Appalachian ballad, it seems that three chords and the truth has turned into sprawling, layered, orchestral compositions, with a bit less truth.

It’s a good direction for folk music to go, though the results have been hit or miss, as is the case here. They play up the talent and layers of the album rather than allowing one part to stick out. It’s a particular breed of folk music more communal than troubadour.

Unfortunately with such an approach, the unique perspective — that “thing” so endemic to Guthrie, Dylan and others — is ignored in favor of more instrumentation, more movements, more “more.” The scale of Rock Plaza Central is marvelous and praise-worthy, but maybe it’s better to be smaller at points.