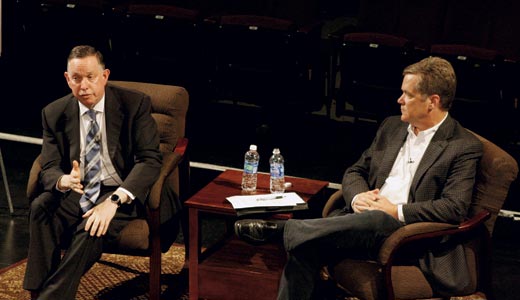 Everyone needs a little help sometimes. Now it is art’s turn.

We are in a recession that may or may not be turning around. Many art groups can’t wait any longer. So it was a happy day when the Obama administration provided $50 million in funding to the National Endowment for the Arts (NEA) as part of the Recovery and Reinvestment Act. The money was then funneled to nonprofit organizations through state art agencies.

For a while there, it looked like the arts were going to be excluded from the stimulus package altogether, most famously by an amendment introduced by Sen. Tom Coburn, R-Okla., that was passed by the Senate. It stated, in part, that, “None of the amounts appropriated or otherwise made available by this Act may be used for any casino or other gambling establishment, aquarium, zoo, golf course, swimming pool, stadium, community park, museum, theater, art center, and highway beautification project.”

Art centers, theaters and museums are related to casinos, golf courses and stadiums how, exactly?

Sen. John McCain, R-Ariz., was another vocal opponent. He said giving funds to the NEA was “unnecessary spending that will not do anything to stimulate the economy.”

We get it. Art is not real work.

While there is federal government help for a select few art organizations, it always seems the most effective mode of assistance is at the bootstrap level. Physician, heal thyself.

Michael Kaiser, president of the Kennedy Center for the Performing Arts in Washington, D.C., formed “Art in Crisis” to do just that. It is a help center offering free consultations to nonprofit arts groups. Or, as Kaiser says, “Arts managers just need someone to talk to.”

Kaiser is known as the “arts turnaround guy” after his successes at the Alvin Ailey American Dance Theater, American Ballet Theatre, Kansas City Ballet and Royal Opera House in London. He’s boiled down his ideas to 10 rules, many of them counterintuitive.

He says resist the urge to cut costs, to slash and burn. He believes that we “need good art and aggressive marketing. When you cut programming and art marketing, you suffer. Organizations need visibility.”

Kaiser also stressed groups should not depend on government or corporate funding but seek out individual donors. Collaborate to cuts costs. Be adventurous, do new things to entice people. “The standard is to just raise ticket prices, pricing them out of the market,” he says. “That’s a central problem.”

My ears perked when he discussed how the arts have to be more involved in education. “The role of education cannot be overstated. Art organizations need to talk to teachers.” I was pleased when he suggested internships as an important educational tool. My experience as a museum intern is one of the highlights of my art career.

He has written a book — “The Art of the Turnaround: Creating and Maintaining Healthy Arts Organizations” — for those who do not have the opportunity to hear him speak.

Kaiser’s advice is geared toward performing-arts groups, but much of the advice can work for visual-arts organizations as well. In fact, what he has to say is encouraging for all individuals and groups in the arts.