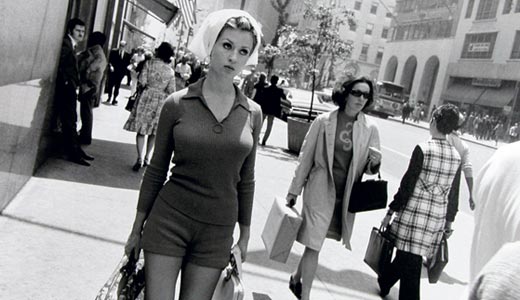 You’ve got to love a man with logic like that. Photographer Garry Winogrand (1928-84) was referring to a series of photos presented in his book entitled “Women are Beautiful.”

Winogrand is famous for roaming the streets of New York City with his camera, snapping pics paparazzi-style. But rather than photographing celebrities, his subjects were commonplace people he encountered crossing the street, getting in or out of cars, chatting with friends. Through his eyes, the ordinary became the extraordinary.

He took photographs rapidly, capturing those fleeting moments of everyday life, with a pre-focused, wide-angle lens on a 35 mm Leica camera. The resulting images were usually tilted off-kilter, energetic, with that documentary feel photographs have when their subjects are not posing. The detailed backgrounds round out the stories.

The gelatin silver print series “Woman are Beautiful” is like a love story about 60s and 70s American women, with just enough voyeuristic touches to make you uneasy. Images such as “Woman with String,” “Histrionics on Bench” and “Women Carrying Bags; One in Hot Pants,” part of the Speed Art Museum’s “City/Country” exhibition, fully illustrate Winogrand’s appreciation of women. Yet there is a feeling of wariness, even stalking, that is inherent in the series. Perhaps that is why the book was never a commercial success as Winogrand had hoped it would be when it was published in 1975.

“A photograph is the illusion of a literal description of how the camera ‘saw’ a piece of time and space,” Winogrand once stated. “Photography is not about the thing photographed. It is about how that thing looks photographed. I photograph to see what the world looks like in photographs.

“I like to think of photography as a two-way act of respect. Respect for the medium, by letting it do what it does best — describe. And respect for the subject, by describing as it is. A photograph must be responsible to both.”

He’s been called the most existential photographer of the 1960s and 1970s, and a great influence on the next generation of photographers. He certainly was prolific: When friends cleaned out his studio after his death, they found reams of film that he apparently never bothered to view; the total has been estimated at more than 300,000 unedited images.

The “City/Country” exhibition includes more than 500 photographs donated or loaned to the Speed Art Museum by Louisville businessman and philanthropist Henry V. Heuser Jr. In addition to Winogrand, some of the top photographers of the 20th century are included in the show.

“City/Country” is part of the 2009 Louisville Visual Arts Festival, which celebrates the Center for Photographic Studies located in Louisville in the 1970s. A small area of the exhibition is dedicated to artists who studied at the center, including Siskind and Ralph Eugene Meatyard.