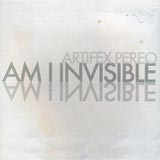 “Qualis artifex pereo” (what an artist dies with me) were supposedly the Roman emperor Nero’s last words. Local experimental rockers Artifex Pereo’s Am I Invisible may not exactly be about the death of the artist, but lyrically it seems like it’s about the struggles they must endure. Unfortunately for the listener, they make it feel like torture. In “Posture and Progress,” we hear, I want my words to act as the weather, sealing gaps in the dialogues between a man and another. A noble enough aspiration; problem is, the form doesn’t really capture the content. After the dreamy, surrealistic opening “Or Am I Dead,” the next four songs are full of awkward breaks and incoherent screams. Then the instrumental “Granulated Eyelids” comes, which is a bright spot, though mostly because it’s a needed break. The album’s closer, “Neighbors,” is solid and begs the question, “Where was this all along?” Am I Invisible is uneven: There are moments, but they’re fleeting.