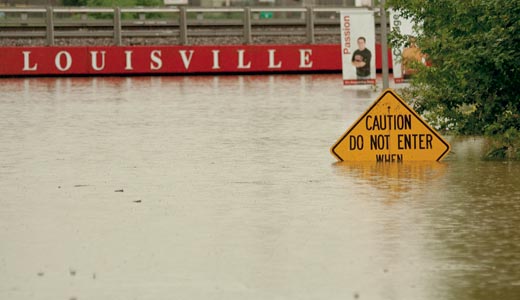 Wading through knee-deep water in The Louisville Cardinal’s flooded newsroom on Aug. 4, Michael Kennedy looked more like a character out of “The Abyss” than the publication’s incoming editor-in-chief. After learning the deluge had left much of the University of Louisville campus under water, Kennedy rushed to the office, located in the basement of the ravaged Houchens Building, hoping to save what he could. Upon arrival, however, his quest quickly turned treacherous.

“I noticed a computer mouse in the water with its red light still glowing inside,” Kennedy says. “That was when I thought, ‘I’m gonna get fried.’”

While Kennedy emerged unscathed, the same cannot be said for the newspaper’s infrastructure. The Cardinal lost most of its computers, furniture and decades’ worth of archived newspapers. The publication, which operates independently from the university and leases its space from the school, has no insurance, prompting the Kentucky Press Association to seek donations on its behalf.

For the foreseeable future, newspaper staffers will operate out of a smaller space in a classroom building without telephones and with few computers. “It’s definitely a setback,” Kennedy says, “but I don’t see it affecting the finished product that much.”

Such makeshift spaces are quite common across campus right now as the university recovers from more than $15 million in damages caused by the unprecedented storm, which dumped nearly 7 inches of rain on the Louisville region in less than two hours. Portions of U of L’s campus were among the city’s hardest-hit areas, with university President James Ramsey calling it the school’s worst natural disaster in modern history. Dozens of buildings were damaged, about 30 of which took on “significant water,” forcing administrators to relocate numerous offices and more than 220 classes.

And although the fall semester began Monday as scheduled, many students and employees are likely to be inconvenienced as a result of the record rainfall, whether it’s due to remote temporary classrooms, sub-par working conditions or longer-than-usual lines in some university offices.

Two crucial university buildings — the Houchens Building and the College of Education and Human Development — remain closed due to extensive damage. It’s a major disruption given Houchens houses a number of vital administrative offices, including admissions, financial aid, the registrar and the bursar.

Michael Abboud, associate director of the Financial Aid Office, said his department’s relocation to the bottom floor of a far-removed classroom building has been frustrating. Since staff members do not currently have access to their computer hard-drives, they have had to work extra hours to re-create work done before the flood. Abboud also says the move has affected the speed of service for walk-in advising, a problem compounded due to the lack of an intercom system and the fact that employees are spread out over three floors.

The university plans to have the Houchens building cleaned up and repaired by mid-September, but College of Education students have a longer wait in store. The building’s air conditioning, heating system and elevators were all severely damaged by floodwaters, and a diesel fuel leak in the basement has left the place smelling like a truck stop. The college could remain closed for the entire semester, prompting administrators to track down backup classrooms.

“Manual (High School) has been nice enough to offer up its facility for night classes,” says Associate Education Dean Margaret Pentecost, during an interview in her new office space — an old dormitory slated for renovation. “The provost even offered up the Jefferson Room where the Board of Trustees meets, so we’re going to have class in there, too.”

And while logistics have been the most immediate concern, some students are worried about how the university will handle damage costs not covered by insurance or Federal Emergency Management Agency dollars. With recurring state budget cuts, the university’s scarcity of spare cash has never loomed more ominously.

“They are constantly worrying about their budgets and raising tuition every year,” says senior Brennan Edgmon. “If they are worrying about fixing flood damage, it makes you wonder if they are going to shortchange students in other areas.”

Vice President for Business Affairs Larry Owsley says the university is still assessing damages and compiling information for its insurance claim. The university’s current policy covers damages to individual buildings, but it remains unclear whether items damaged inside the buildings will be covered. Once details about insurance are worked out, university officials plan to seek federal aid, although they don’t expect that to cover all the costs.

As a result, the university recently kicked off a “Restore U of L” campaign, seeking donations to help repair uninsured parts of campus that were damaged not only by the flood, but also by the February ice storm and September windstorm. In addition to using the funds to revitalize the battered campus, collected donations will be used to help students and employees whose property was damaged during the storms.

Given the flood caused such extensive structural damage, it’s hard to believe no one was seriously injured on the submerged campus, where emergency workers rescued more than 30 people by boat. That being said, many are willing to take any resulting annoyances in stride.

“We’ve tried to keep each others’ spirits up and have a sense of humor about things,” Abboud says. “I mean, we’ve had a windstorm, an ice storm and now a flood. What’s next? The locusts?”