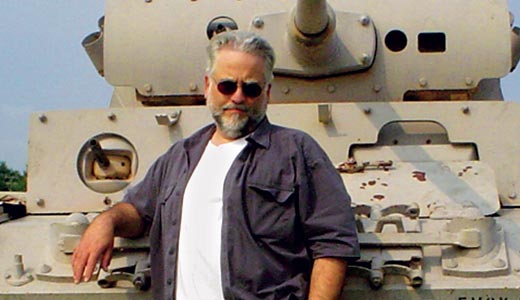 Chuck Dixon may not be a household name, unlike several of the characters he’s depicted in a comic book career that spans nearly three decades. There’s the grim and gritty vigilante the Punisher, J.R.R. Tolkien’s fantasy staple the Hobbit, America’s favorite family the Simpsons, and the truly iconic Batman, all of which are among the hundreds of characters Dixon has had a hand in shaping over the years. The prolific scribe has contributed over a thousand scripts and he’ll probably crank out a thousand more before his comic career ends.

A talented craftsman, Dixon is known for his two-fisted style, full of big guns and big action. Of all the characters he’s written so far, Marvel’s Punisher is his favorite.

“Maybe it’s the elegant simplicity of the character,” Dixon said. “He’s the only one that, despite the fact I don’t write him anymore, that I still think of stories for.”

Currently, Dixon is writing “G.I. Joe” for IDW Publishing, a reboot of the 1980s comics series that’s getting a boost from the mega budget summer flick.

“The Joe universe is pretty tight, so there are a few differences from the movie, but the attitude is the same,” said Dixon. “The series I’m on begins just as the G.I. Joe team is learning of the existence of Cobra.”

In addition, Dixon is working on a comic book continuation of Sergio Leone’s cinematic classic “The Good, the Bad and the Ugly,” a gig he calls “a dream assignment.”

“I love all Westerns and have a special fondness for spaghetti Westerns,” he said. “To get to play in that surreal world in comic form is the most fun I’ve had in a while.”

While crafting comics for licensed characters can eliminate some of the imaginative heavy lifting, it also presents another set of challenges, namely, making sure said characters’ corporate overlords don’t get their collective panties in a twist about any unauthorized creative directions. It’s an issue Dixon has experienced in the past, but one that’s become more common in recent years.

“Batman in particular was a pinch-me-I’m-dreaming assignment. I never thought I’d get to play a part in something that huge,” Dixon said. “I was on the ‘Batman’ books at a more freewheeling time creatively. The whole business has become more Hollywood-corporate since that time. When I was doing ‘Batman,’ the creators were left to their own devices quite a bit more than is allowed now.

“But independent companies can be hard to deal with as well. It all depends on the editor. On ‘Joe,’ especially, I have an editor who has faith in me. Ironically, Hasbro, which is a multinational corporate giant, is far more open to creative thinking than I’ve experienced in my recent dealings with the major comic companies. It all comes down to personalities. Like everything else, right?”

This year, Dixon will forego the upcoming big Wizard World Chicago Comic Con and instead embark on a short tour through the Ohio Valley, visiting a few select comic book retailers, including two in Kentucky.

“I have some good buddies who live in the area and fired the idea past them of skipping the Chicago convention and going on a more grassroots set of appearances,” he said. “‘G.I. Joe’ is a comic that has broad appeal beyond the usual comic book fanbase, and I wanted to get out there and meet the fans.”