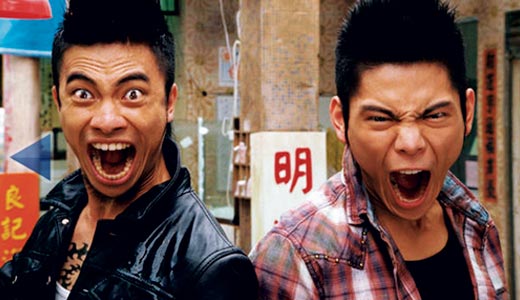 This had the potential to be a killer, pull-out-all-the-stops summer blockbuster — yet intelligent and profound in its implications. The filmmakers decided to put Nicolas Cage on the screen, instead. Here he deciphers a cryptic text found buried in a time capsule that tells him when major disasters will occur. (His own filmography playing a leading role, no doubt.) Can he learn how to prevent them? Can he save us all from The End Of The World? Can he ever learn to act? A fun if criminally wasted opportunity, and a nice warm-up for other End Of The Worlders to come, including Roland Emmerich’s “2012,“ due out in November.

Most critics crapped on this shallow “Jumper”-inspired teen-superheroes actioner, but we had a ball. A dark government agency turns ordinary citizens into psychic warriors. Telekinetic Chris Evans has escaped from their clutches and hides with others like himself in Hong Kong until clairvoyant — and burgeoning babe! — Dakota Fanning miniskirts her way into his life in search of a friend whose powers could put an end to the agency’s reign of terror. It’s all just an excuse to stage wildly imaginative and noisy battle sequences with lots of CGI overkill. Kewl.

ALI BABA AND THE FORTY THIEVES

Universal Studios has kindly cracked open the vaults to reveal this glorious Technicolor marvel. In more of a sequel to the old bedtime story, grown-up Jon Hall sets out to right wrongs and rescue exotic beauty Maria Montez from the wonderfully evil Kurt Katch. But the real dazzlers here are sexy/evil Ramsay Ames and the expansive fight scenes featuring some of the largest crowds ever assembled in Hollywood. A lush and, frankly, silly movie that is guaranteed to entertain.

Kentucky boy and dad to Smiley-Miley, Billy Ray Cyrus stars with Heather “Yowza” Locklear and Patricia Neal in this “being a musician means never having to say ‘I grew up’” family drama. He goes to his 25th high school reunion, regroups his old band and heads out for a reunion tour. … Until his wife, daughter and business partners get wind of it.

A really good — if disturbingly close to home — PBS outing about how American society deals with mentally ill criminals — by dumping them, untreated, back on the streets! They don’t belong in prison because they’re not responsible for their actions, but there is no social institution that can afford to keep them from inflicting further harm on themselves or the world at large. Hey, that’s a job requirement here at LEO!

IN MEMORY OF MY FATHER

A top-notch indie cast (Jeremy Sisto, Christopher Jaymes, Judy Greer) has dark fun with this ego-driven tale of a Hollywood legend-in-his-own-mind who bribes his son to make a documentary about his death, believing that it simply MUST be of historical import.

A doc on the first leg of Iron Maiden’s “Somewhere Back In Time” tour: 50,000 miles and 23 concerts in 45 days. Worth checking out if only to see Ed Force One, their seriously cool custom Boeing 757 — piloted by lead singer Bruce Dickinson!

Forty years ago, man touched the moon for the first time in human history. And the two of us watched it on TV. It was indescribable. Today, all that most people remember is Neil Armstrong and “one small step,” but as this Science Channel series reminds us, it took more than 400,000 people to design and build the few scant machines that actually touched the lunar surface. Six episodes, one unique event.

Judd Nelson would not have been our first choice to play Alan Freed, the Cleveland DJ who coined the term “rock ’n’ roll” — originally a slang black term for gettin’ laid — and sent it sweeping across America, but he seems to be enjoying himself. A re-release of a very watchable TV movie with Paula Abdul, Madchen Amick and some of the best music this side of heaven.

Shout! Factory’s latest in the series is one of the best! And one of the worst! They’ve dug out always-welcome old bits from Joel Hodgson, and such low-lights as “The Robot vs. The Aztec Mummy.” But the highlight of this set has to be their skewering of the legendary Adam West/Tia Carrere stinker “Zombie Nightmare”: a movie that even we can’t sit through without the Satellite Of Love’s help. Fans of Trace Beaulieu and Kevin Murphy (who once gave us a plug, back when we were nationally syndicated) should check out the included trailer for “Hamlet A.D.D.”

This big-budget spooker with an expensive cast (Gary Oldman, Meagan Good, James Remar, Carla Gugino, etc.), big director (Michael Bay) and top-notch special effects is hampered by the PG-13 rating and an amazingly bad script from the guy who co-wrote “The Dark Knight.” All that aside, we love “evil widdle kid” flicks, particularly when there’s a yummy babe like Odette Yustman front-and-center. Gary Oldman is hilarious as the rabbi who reveals the Nazi connection. Wonderfully bad. Enjoy.

THE UNIVERSE: THE COMPLETE SEASON TWO