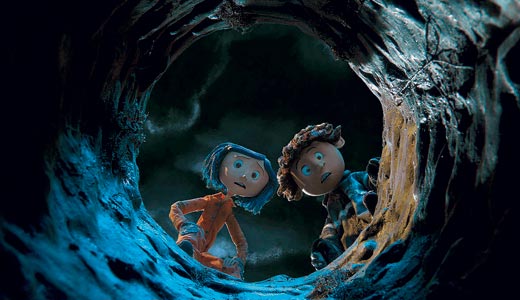 This is classic Neil Gaiman. The British comic-master/fantasy-maven and creator of “Neverworld” has filled this too-good-for-kids childhood nightmare with classic Gaiman heroes and villains (which you can’t tell apart), all brought to life with icky “Nightmare Before Christmas”-like precision. Voiced by Dakota Fanning, Teri Hatcher, Jennifer Saunders, Dawn French and others, the great songs by They Might Be Giants are just icing on the cake as 10-year-old Coraline finds a pathway to an alternate reality that just might be better than this one. Or not. A must-own. (BTW: Gaiman’s been picked to develop the big-screen “Dr. Strange” due in theaters by 2012.)

This is not Alan Moore’s “Watchmen”: His graphic novel is as intricate and sophisticated as any work from classic literature — and completely unfilmable. This is Zack Synder’s “Watchmen”: A dark and fatalistic film adventure set in Moore’s dream world where superheroes are real but all too human. And someone has murdered one of them. And the others are banding together to uncover the culprit — and a plot against all humanity. Dark, depressing and brutally honest. Watch the movie, then re-read the book.

Several years ago, a pair of feisty, elderly Shoshone sisters hauled the United States before the UN, accusing us of human-rights violations. How’d they do? We won’t spoil it. Just be sure to check out this excellent doc about their simple life — grazing horses and cattle on the Shoshone Reservation — and the armed Federal Marshals who came to arrest them for it and confiscate their land, which, it seems, just happens to have gold under it. Lots of it.

A silly, if lively, global conspiracy actioner starring Shane “Once and Again” West of the band Jonny Was. Co-stars Edward Burns, Ving Rhames and Martin Sheen. But don’t let that stop you.

A brilliant West-meets-East haunter. Marina Resa takes a job as a housekeeper for a pair of Asian ladies during the seventh month of the year, a time when spirits of the dead can infect the living if you so much as (1) whistle, (2) turn at the sound of your name, or (3) disturb ashes. We really got a kick out of this.

Have you ever googled your own name? The maker of this doc did, sending him on a odyssey to meet the Irish priest, retired cop, father of eight, Scottish engineer, sex-junkie and others who share his name — and, sometimes, his DNA.

A prequel to 2007’s “The Messengers” frightfest, introducing John Rollins (Norman Reedus), the original owner of the savagely haunted farmhouse. Seems everything was going poorly for him until he installed this particular scarecrow. Then crops appeared in abundance … but at what cost? Bwahahahaaaa.

Fans of the TV series were generally disappointed with its fourth and final season, which, by the time the finale was presented, had skipped over four friggin’ YEARS of the characters’ lives! This DVD (which seems like a rather insulting revenue device by the producers, if you ask us) fills in all the gaps, and, frankly, is far better than anything in Season 4. With all the series stars, including Robert “T-Bag” Knepper, who worked at Actors Theater of Louisville back in the ’80s.

Yep, they made another one. If you need to know more than that, you wouldn’t be interested. Contains both the 22-minute broadcast version and a 38-minute extended edition.

For John Malkovich fans: Here he plays a formerly successful stage mentalist whose act made him a household name across the country. Today? Not so much. But he plans to get back on top once again with the help of Colin Hanks and Emily Blunt.

This series, starring Lucille Ball and Vivian Vance from “I Love Lucy,” was Lucy’s first solo venture after divorcing Desi Arnaz. Drawing from her own life, she plays a widow who works for Mr. Mooney (Gale Gordon) and lives in a house with her divorced friend (Vance), along with all their children and an endless parade of top guest stars.

If you’ve never heard of this outrageous Limey import full of fun, music and wild fantasy … get a life! A pair of co-workers at a zoo (so poor they have to pretend to be the animals!) goes on Python-esque trips through space and time a la “Red Dwarf.” By the second season, they’ve taken up with Naboo, an Indian shaman, and his talking ape, none of which seems odd in this terrific sci-fi/comedy series. Three seasons available.

THE MYSTICAL ADVENTURES OF BILLY OWENS

What this low-rent “Harry Potter” rip-off doesn’t have in the way of literary leanings it more than makes up for in plain-old FUN! A young boy stumbles upon a magic wand in a mysterious pawnshop, launching him on an adventure filled with mythical creatures, haunted realms and Rowdy Roddy Piper.

Yeah, we know, this is just one of those Reader’s Digest videos you find in the Wal-Mart cut-out bin. Sue us, we liked it. Orangutans romp in green-jungle treetops, dolphins gather to sing and dance, penguins frolic in a frozen playground and eagles drift on the clouds — all to the strains of the world’s most beautiful classical music. It’s 48 unspoken minutes of blissful, mindless beauty. You need this.

NOVA: THE INCREDIBLE JOURNEY OF THE BUTTERFLIES