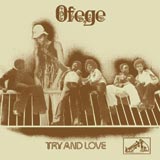 Continuing the current explosion of excellent 1970s African music being reissued in the West for the first time, Brooklyn’s Academy Records (a reissue label started by quite possibly the best vinyl store in the country) has reissued Try and Love, the 1973 debut album by Nigeria’s Ofege.

Whereas Nigeria’s most well-known superstar, Fela Kuti, might be superficially comparable to our James Brown, Ofege could also be considered the continent’s Jackson 5. Consisting of five unrelated teenagers, Ofege took their country by storm but missed greater opportunities because their parents didn’t allow them to quit school. However, unlike the J5, Try and Love’s music has a conspicuous maturity that surprises. But the album doesn’t forget to rock, complete with super-psychedelic, post-Hendrix guitar over African polyrhythms.