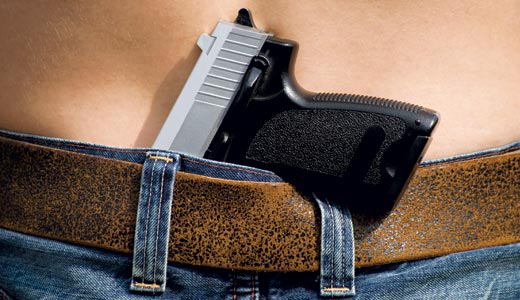 “This is the only state where a blind person can get a concealed carry license, you know?”

So says Bluegrass Indoor Range’s Joe Morelli, a former Navy man, championship marksman and licensed concealed deadly weapon instructor who, while addressing this early-morning class of 11 pupils, pauses and notices we think he’s joking: “No, seriously,” Morelli continues in his thick Massachusetts accent, “there was a blind guy not too long ago who had a friend help him with audio cues, and the blind guy passed. The targets you’ll be shooting at in just a moment are only 25 feet away, so at that range you can just throw the bullets and do well.”

Now it appears Morelli actually is joking. To be fair, though, he’s an easygoing person, not to mention a confident instructor: A student has never failed his course, but why should they? The eight-hour concealed carry license-training program is a rather straightforward affair, riddled with terminology, ethical considerations, Kentucky Revised Statute legalese and (of course) bullets — lots of bullets[1].

It’s also pretty damn easy: Eight hours covering the basics of the basics — including firearm nomenclature, proper grip, stance, cleaning, maintenance and an instructional video — that feel more like obtaining a food handler’s permit or attending driving school than applying for a license to carry a .50 Desert Eagle in a fanny pack.

That ease probably accounts for but a small percentage of the 15,531 concealed carry applications that have already flooded the Kentucky State Police this year, which signals a dramatic jump in the roughly 16,000 permits issued in all of 2008. Conventional wisdom posits that the spike is mainly due to the election of President Barack Obama, whose perception as a card-carrying liberal by Second Amendment-types has translated into a panic of sorts; worried that stringent anti-gun laws will be passed at any moment, gun-owners are rushing out in droves to retroactively inoculate themselves from such laws.

Although some of this panic is rooted in truth — the president has made clear on numerous occasions that he’s no Charlton Heston — many of the reasons seem decidedly apolitical[2]. One of my classmates, “Roy,” works in security, and having recently moved from West Virginia, he needs to gain a Kentucky concealed carry license to do his job without worry of going to jail for it. Surprisingly, most of us don’t even own a gun, a fact that flabbergasts Morelli after he asks how many of us need one for the range.

“Normally it’s just one or two who need to borrow one of [our firearms],” he says, surveying the show of raised, gunless hands and shaking his head, “but never most of the class …”

Then we go and discharge some bullets into pieces of paper to prove that we are, in fact, just as qualified as a blind man. Only one of my classmates skirts by with the nearly bare minimum (11 out of 20 shots placed within the target’s gray, vaguely human silhouette), as roughly half of his shots were concentrated around the silouhette’s “head.”

“You just barely got it,” says Morelli.

The Kentucky Department of Criminal Justice Training’s instructional video manages to put a good many of us in the land of nod, heads-in-hand or slouched back into the marginal comfort of our metal folding chairs, uttering heavy sighs with each page-turn of the accompanying course literature. It’s the most comprehensive portion of the lesson, yet despite the dryness of its presentation and mind-numbing question-and-answer sections, nobody falls fully asleep.

So how, in just eight hours, can an individual with as crude an understanding of firearms as mine emerge ready to bring a deadly weapon into an Applebee’s restaurant by virtue of completing a multiple-choice test?

“What people in the state did,” Underwood begins in a gentle, soft-spoken tone, “was to take everything that you could possibly know about firearms, put it all up on a wall and say, ‘OK, how can we teach all of this in just one day?’ And you really can’t, except for the basics. Although the state now recognizes you are qualified to carry a concealed firearm, most of you just aren’t ready to use your gun properly in a combat situation.”

He continued on a push for interested licensees to apply for his range’s advanced, tactically focused course, dubbed Concealed Carry II.

“What’s gonna happen when you need that gun?” Underwood asks. “You’re here because you think there’s a threat, obviously, otherwise you wouldn’t be here today. You know that there are people in this world who are gonna walk up to you and stick a gun in your face … two people were just shot dead in the West End. So after everything goes through, you’ll have a license that doesn’t really qualify you to handle a gun in that situation properly. But it is a license to learn.”

He points out that during the shooting section of the course, some of us had rounds that completely missed the target. “In the real world, you’ll have to ask, ‘Where did that round go? Did it hit a child in a stroller?’ That’s why you should sign up for Concealed Carry II. You’ll have no doubts, no regrets, no excuses.”

Underwood exits the room, Morelli returns to play the rest of the video and, when it’s finally over, the range’s gunsmith, Paul Taublee, a burly, Bunyon-esque man with a lengthy white ponytail, enters the room and lectures us on the final part of the course: firearm cleaning.

He proceeds to dissemble our classmates’ handguns, comparing them with one another and detailing the parts, and passing the pieces around the room. For the most part, Taublee delivers an expansive, hour-plus rant on everything from the required course material, to FBI agents being unable to clean their guns, to why it’s not good to use the slide lock a la action movie heroes (“Do that shit enough and when you get in a gun battle in a Walmart parking lot, you’ll pull out your gun and find that you’ve destroyed your lock and BANG! You’re dead, man.”), to professional courtesy (“I always leave my guns wet with a little oil, man, yet some of these smiths here in town will return your gun drier than a popcorn fart.”).

Morelli keeps looking at his watch until the entertaining and informative Taublee leaves the room amid a round of applause. We’re then dismissed. It’s over. Prospective graduates that we are, we shuffle out of the classroom, past the firing ranges, through the glass doors and into the warm daylight, the muffled boom of gunfire punctuating our every step.

1) Yet firearms are just the tip of the iceberg: “Deadly weapon,” as defined by Kentucky law, also includes nightsticks, nunchakus, brass knuckles, shuriken throwing-stars and WMDs (assuming you can find one).

2) Politics rarely entered into the class discourse, save one occasion wherein Morelli was asked if there was any limit to the amount of rounds an automatic rifle’s magazine could hold. His response: “No, unless Obama gets his way …”