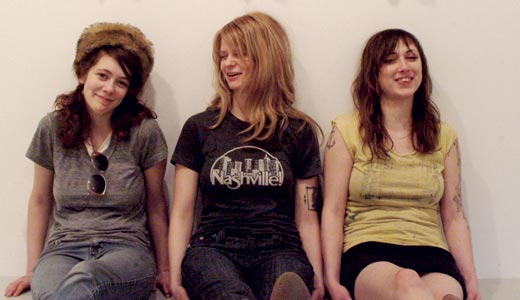 Jessi Darlin was born in Nashville but spent a good portion of her young life in Kentucky.

In a day and age when just about every musician wants a say in which label will be ascribed to them by fans, foes and media, Tennessee-based Those Darlins are content to relinquish that responsibility.

“We make the music, and it’s not really our job to figure out what kind it is,” says singer-guitarist and former Kentuckian Jessi Darlin. “That’s for the listener to decide themselves. It’s like when someone paints a picture or something, it’s not like the artist is going to have to sit there and describe what the picture’s all about. They’re like, ‘I painted the picture, that’s for you to decide.’”

Despite their reluctance to settle on one sound, various outlets call the Darlins many things. They call themselves pop, a Blount County, Tenn., newspaper calls them Americana and the almighty William Miller wannabes at Rolling Stone deem them “the riot-grrrls of folk music.” All three are a source of confusion to the Darlins. (All members share the fictional surname).

There is no denying that the band is unabashedly influenced by country music. Woody Guthrie and the Carter Family are two favorites (if you’re lucky, you’ll come upon a Carter Family cover or two at a Darlins show). But don’t confuse them with Top 40 ingénues like Faith Hill and Taylor Swift.

“We market ourselves very carefully, because we don’t want to be pegged in that category,” Jessi says. “We don’t want anyone to think, in any way, shape or form, that we might be on CMT.”

Born in Nashville, Jessi Darlin grew up in Kentucky. She spent time in Russell, Henry and Meade counties before finding her way to Louisville and the Highlands. The band formed in Murfreesboro, Tenn. (about 40 miles southeast of Nashville), where music is a way of life rather than a hobby or general interest — Middle Tennessee State University has a world-renowned music program, and the town kind of lives around it.

“It’s not a big deal at all for anyone to just go, ‘I’m going to play a show,’” she says. “Everyone we knew played shows. It would be rare if someone we were friends with wasn’t in a band or didn’t play solo, and even if they didn’t, everyone goes to shows. It’s just what this community does.”

The environment is familiar to Jessi: both her parents are artists, and she grew up relatively poor, though rich in familial encouragement. She says she has always known what she wanted to do with her life, so much so that she broke free from academia at an early age.

She and the band have come a long way since the days of being genuine starving-artists:  The vinyl/CD package of the band’s first self-titled LP (500 of which are pink, an accident by the company, Jessi says) was released on June 27, and the CD was released July 7. They were namechecked by many news outlets and blogs as “The Buzz Band of SXSW ’09” and most recently played at Bonnaroo. They are about to embark on a nationwide tour.