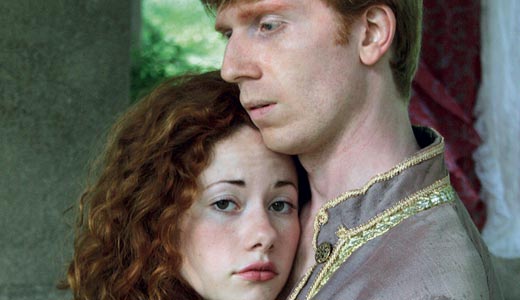 Romeo and Juliet, those star-crossed teenage lovers, are such a familiar pair, with contemporary counterparts ranging from Lou Reed songs to “High School Musical.” So familiar, in fact, that it can be difficult to drum up much enthusiasm for yet another production. But classics are classics because they endure, and Anthony Patton chose wisely for his first directing project as producing artistic director of the Kentucky Shakespeare Festival. Few sights are as exhilarating and frightening as teenagers in love, and Patton’s skillful casting and staging remind us how timeless tragedy is.

Set in the Restoration period, this production’s opulent brocades and stately villas highlight the world of privilege the Montagues and Capulets inhabited, as well as the treachery of ever-shifting social favor and standing. Family feuds were serious business, to be balanced carefully against the good graces of Prince Escalus (Sean Childress), so disgusted with the families’ public brawls he declared death the punishment for the next sword drawn. In this atmosphere of thin-skinned bravado, even small insults cut deeply, so when hot-blooded, dreamy Romeo (Michael Judson Pace) first meets sheltered, imaginative Juliet (Julane Havens), the sparks of their undeniable chemistry are rivaled only by the thunderous reveals of their respective last names.

Romeo and his carousing boys are a delight, devouring fair Verona with voracious appetites, leaving a trail of women and spilled wine in their wake. Long-suffering Benvolio (Michael Tolfo) tries to keep the fragile peace, but Mercutio (the delightful Johnny Kinnaird) keeps the wolf pack on their toes with his charismatic wit and playful physicality. His death, which hooks the story from romantic comedy to tragedy, is tragic in its own right — when Juliet’s cousin Tybalt (Brian Hinds) kills Mercutio, not only does Romeo’s grief twist him toward impulsive action, Verona’s light goes out. Then Romeo kills Tybalt and is banished, and all hell breaks loose.

It’s easy to sit in our 21st century chairs and wonder why faking their own deaths sounded better than defying their families, but Juliet’s isolation is telling. While Romeo has his loyal gang of kinsmen who are willing to die for one another, Juliet faces a distant mother (Abi Van Andel) and a terrifying father (Dathan Hooper) with only her nurse as a friend and confidante. Tiffany LaVoie infuses the nurse, a character often played broadly, with rich layers of sentiment and sensitivity that play sadly off Juliet’s parents’ betrayal, but she is neither peer nor family.

What started as a romantic adventure turned deadly serious in a moment. It’s easy to imagine a love-sick 15-year-old, forced to choose between an arranged and technically invalid marriage to a totally lame civil servant and getting kicked out of the house in a time when women on their own had no chance of safety, choosing a wildly improbable and dangerous alternate course of action. True classics offer us fresh lessons with every telling, and this production of “Romeo & Juliet” reminds us, not so gently, that death isn’t so scary when you’re facing worse fates.