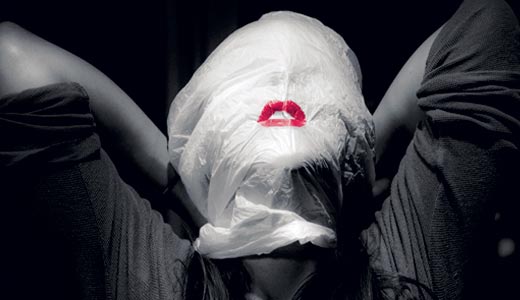 The apocalypse is nigh — so who spends the night? In “BOOM,” playwright Peter Sinn Nachtrieb asks us to consider some questions, big and small: What do the fish know that we don’t? How would you face the end of the world as we know it? Who’s that pulling the levers? And is the human race worth saving at all? With a hilarious and talented cast under the sharp direction of Mike Brooks, this Necessary Theatre production is one of the best shows in recent memory.

Jules (Jeremy Sapp), a “sad, sexless hermit” of an orphaned, discredited biologist, places a casual encounters ad promising “sex to change the world.” It’s answered, unfortunately, by prickly Jo (Leah Roberts), a sort of human fainting goat in search of a moving story. Her theory — that meaningless sex can lend meaning to an otherwise meaningless life — unravels almost immediately, as Jules reveals his “sweet, hunky, accurate data” that predicts a catastrophic comet speeding toward Earth. Jo, terrified to be spending the next two years held captive by a gay virgin in an old bomb shelter, isn’t too keen on his idea of repopulating the human race with their flawed offspring. His optimism in the face of disaster clashes with Jo’s studied nihilism, not to mention her feisty self-defense karate chop.

What Jules and Jo lack in sex appeal they make up for in laughs. Sapp and Roberts are fearless — they sink their teeth into Nachtrieb’s hilarious and caustic script with a crackling comedic chemistry as their characters unravel in the face of disappointment and disaster. But it’s the mysterious woman in the lab coat pulling the levers that start and stop the story who steals the show. Becky Lecron Poschinger is pitch-perfect as the flailing Barbara, an overwhelmed interpreter who means to tell the story of Jules and Jo by any means necessary. In the hands of a lesser playwright, she would have been a postmodern gimmick (the drums, the levers, the broken fourth wall), but Barbara’s moving story turns out to be the heart of the play.

Little productions often strain under limitations that Barbara self-deprecatingly names as “physical, cognitive, budgetary,” but even with a shoestring budget, a small crew and a barebones set, “BOOM” manages to get the minutiae right. A slideshow demonstrating the odd, telltale behavior of Jules’s fish contains whimsical illustrations by Matt Dobson (reminiscent of Eric Chase Anderson’s work in “The Royal Tenenbaums”), a tiny, charming detail that might have been overlooked in a larger production.

When the Necessary Theatre encourages patrons to “be a part of something small,” they’re talking about agility and focused passion — both virtues of an independent theater company. With a brilliant script, a talented cast and a director with a vision, a small company can pull off a show that rivals the best of what our bigger venues offer. With “BOOM,” the Necessary Theatre declined its constraints with a cavalier shrug, proving small theater doesn’t have to mean diminished impact.