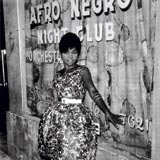 Like the end of “Raiders of the Lost Ark,” EMI’s Hayes Archive is a massive structure housing untold thousands of hours of recordings, some dating to the 19th century. The good people at Honest Jon’s have been granted access to this collection and now spent five volumes cherry-picking the nearly unending selection of 78 rpm records.

The World is Shaking collects mid-’50s Congolese rumba, jazz and Latin-influenced rhythms for a staggering 21 tracks. One must first shake sonic expectations, as these were spare recordings in the first place, and no matter how much you clean up a 78, certain defects remain. That said, this is a welcome window to a world long forgotten, overshadowed by the next two decades’ Highlife and Afrobeat. Rhythm guitars and likembe (thumb pianos) are hypnotizing, transporting the listener to another world. Can’t wait to see what they come up with next.