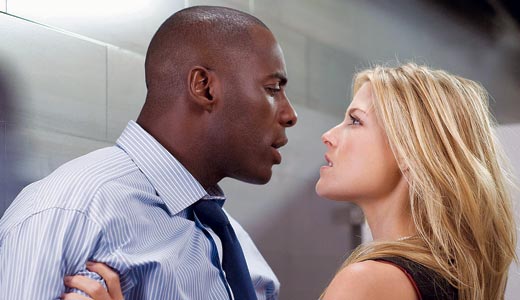 A good old-fashioned suburban adult melodrama with lots of (implied) sex and seriously beautiful people acting provocatively. Idris Elba and wife Beyonce Knowles move to the ’burbs of L.A. — happy, loving and full of life. But when the unhinged blonde (or is that redundant?) co-worker, Ali Larter, takes an unhealthy shine to hubby, her “boundary issues” are the least of their worries. Pretty. Dumb. Entertaining.

Long-delayed true drama of two men: L.A. journalist Steve Lopez and homeless, mentally ill street musician Nathaniel Ayers. Lopez (Robert Downey Jr.) has lost his inspiration and needs a good story quickly if he is to keep his job. That’s when he meets Julliard-trained Ayers (Jamie Foxx, in the best performance of his life), playing a broken instrument with one string — and doing it beautifully. Lopez writes his story, resurrecting his own career, while Ayers’s life falls deeper into wretchedness. Can Lopez walk away from this smelly bit of human tragedy? Could you? Yeah, obvious from the get-go, but a powerful and brilliant film nonetheless.

Better known as “Daddy’s Girl,” this is one profoundly dark and disturbing modern vampire tale, light-years from the Bela Lugosi tradition. A troubled psychiatrist (Richard Harrington), who has just lost his wife, tries to help an even more troubled teen (Jaime Winstone), who has a pathological attraction to blood — even her own! Lots of sex, comic demises and real-life vampiric cultures and diseases collide brilliantly (if high on the squirm-scale) in this minor black gem.

With a massive voice cast (Freddie Prinze Jr., Chris Kattan, Jennifer Love Hewitt, Anne Bancroft, Val Kilmer, Malcolm McDowell, Michael Clarke Duncan, Louis Gossett Jr., Eric Idle, Burt Reynolds, Kelly Ripa, Sally Kellerman and more!), this American-made anime was more than six years in the making. So, is it any good? Well, we liked it. A troubled young man lives in a land divided between land-dwellers and sky-dwellers, both of whom must join together if they are to save their world from the evil that is tearing it all apart — or is the evil of their own making? Contains the final performances of John Vernon and Anne Bancroft.

A wicked supernatural action-thriller from Thailand. A gang of demons attacks our world, and a police detective learns that a group of invincible warriors is all that holds them at bay. But in order to join them, he must commit suicide! But then, for each battle, he must sacrifice one of his remaining human senses to continue. A truly entertaining and original tale.

The Animal Planet channel has some of our favorite kick-back-and-waller-the-couch programming. An example? This outing contains “Jessica the Hippo,” “There’s a Rhino In My House,” “Saba and the Rhino’s Secret” and “That’s My Baby: Cleo the Hippo.” Too good for kids.

Oh, wow! We had never seen this turkey before but read about it years ago in Michael Weldon’s Psychotronic Video Newsletter! Better known as “Killing Blue,” Armin Mueller-Stahl stars as a cynical police inspector in Berlin who is tempted by his new assistant while on the trail of a brutal killer. And why, you ask, are we so excited about that? Well, it co-stars third-tier thesps Morgan Fairchild, Frank Stallone and Michael York, plus the immortal Harvey Friedman (Dr. Joseph Goebbels in “Valkyrie”; the German announcer in “Speed Racer”). A truly awful cult intercontinental train-wreck of a film that has to be seen to be believed.

There must be 10,000 movies based on video games by now, and frankly most of them suck — but this one is worth checking out. Thomas Jane and Ron “Hellboy” Perlman star in what was originally a Swedish roll-playing game, eventually becoming a comic book before being rolled (in part) into “Doom Troopers.” In a war-ravaged future Earth, an ancient alien nemesis has broken free. Its goal: to turn all humanity into undead mutants using a ghastly machine buried deep underground. A team (assembled by John Malkovich!) sets out to find and destroy the machine before its ever-expanding army of lethal, chitin-armed killers destroys all life on our planet. Dark, violent and epic in scale: We liked it.

Disney reboots its seminal 1975 “Escape to Witch Mountain” adventure tale for kids as yet another attempt to make Dwayne “The Rock” Johnson into the next Tim Allen. Lots of flashy CGI and on-screen talent — AnnaSophia Robb, Carla Gugino, Cheech Marin, Garry Marshall, etc. — but the original is sooooo much better. Ask for it.

First Blu-Ray release of a modern American classic. In his breakout roll, writer/director Billy Bob Thornton stars as a quiet, dim-witted killer who returns to his hometown after 25 years only to find … Dwight Yoakam! Seriously, this is one terrific movie co-starring Robert Duval and the late John Ritter. Not bad for a Southern boy.

A rare treat for epic action fans — originally titled “Volkodav iz roda Serykh Psov” (“Wolfhound of the Grey Dog Clan”), this is a Russian fantasy tale of the last living member of a slaughtered tribe who vows to free the world from the supernatural tyrant who massacred his family. The evildoer — who makes Sauron look like a Boy Scout — is a wonder to behold due in part to the massive budget and clever effects (this being the second-most-expensive Russian-language movie made since the fall of the Soviet Union). Truly exciting.

FLIGHT OF THE CONCHORDS: THE COMPLETE SECOND SEASON