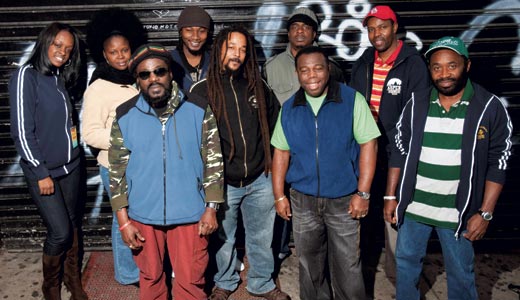 When Bob Marley and the Wailers entered the studio in late 1976, they had already faced death and come back ready to conquer the world.

An assassination attempt in Jamaica had left Marley wounded and his band members scared for their lives. Marley packed up the band from their homeland and migrated to London, where they would record their ninth studio album, Exodus. It would change their lives, spawning three major international hits, sitting on the British charts for 56 consecutive weeks and propelling Marley to the international superstardom he would enjoy all too briefly.

Listening to Exodus today, it still works as a jovial pop album, but it is fascinating to see how Marley crafted the songs based on his own brush with mortality. Marley’s trademark optimism is there, but it is balanced with recognition of his own finite nature. Galvanizing lines on “Jammin” like No bullet can stop us now/we neither beg nor we won’t bow are undercut by reflective lyrics like I hope this jam is gonna last. On “Natural Mystic,” he laments that Many more will have to suffer/many more will have to die/don’t ask me why.

These somber moments give the album a stolen quality, as if we only have a few more moments at the reggae party before the fuzz beat down the door and carry everyone away. This balance of light and dark lends the album a substance that, more than 30 years later, still holds up.

Exodus remains one of the most acclaimed albums of all time. In 1998, Time magazine voted it the greatest album of the 20th century, and it made No. 169 in Rolling Stone’s 2003 list of the 500 greatest albums. The BBC named the song “One Love” its Song of the Millennium.

Though Marley passed away from melanoma in 1981, the Wailers are still going strong, led by bass player and original member Aston “Family Man” Barrett and lead singer Elan Atias. They recently began the second round of their nationwide Exodus tour, featuring full performances of the album. The tour is largely an effort to promote their “I Went Hungry” campaign that donates unused funds from the band’s hospitality riders directly to the United Nations World Food Program. To date, the charity has already fed more than 150,000 people.

LEO Weekly recently caught up with Barrett via e-mail during a grueling set of European tour dates, discussing topics of Marley’s legacy, the popularity of Exodus and the album’s social relevance today.

LEO: When the album was being written and recorded, did you feel as if you were making something special?
Aston Barrett: There was always something special about the album right from the beginning. Everybody was excited to record it. It’s the words of the people. And as Bob would always say, “It’s movement time.” It’s movement of jah people.

LEO: Why do you feel like this album resonates so much with people?
AB: The music is universal, meaning to uplift the oppressed, wipe out the oppressors and give help to the downtrodden. In today’s crises all over the world, it’s more important than ever to just get together and feel all right. And also to keep alive the message this band has sung for 40 years of bringing people together through One Love.

LEO: You touched on the album’s universal appeal. Do you still feel that it has just as much relevance now as it did when you recorded it?
AB: People will always want to listen to these songs. Today, we have the same message in a new time. I think we continue to be successful in achieving the goal of spreading out messages of love and defiance, but unfortunately, there’s still work to be done. Our message has inspired the youth to get up and stand up for their rights, and it’s clear that more people still need that inspiration.

LEO: How much of the album is a reflection on the pain you saw around you, whether it was in Jamaica or other parts of the world?
AB: [Exodus] carries the message of culture and reality. We always wrote lyrics and set music according to the time. What we heard on the radio and saw on television and read in the papers were signs of the times. Bob came up with it when we were talking about people moving, doing things for themselves.

LEO: Marley has always existed to me as this monumental figure of optimism and hope. Do you feel a responsibility to keep his legacy alive?
AB: We keep the spirit of Bob alive through the reggae music, and we all work at it. We’re just ordinary people who do extraordinary work, and we do it by working and living together. Thy will must be done by all means, no matter the crisis.

LEO: Is it difficult to play Exodus without Marley there with you?
AB: His spirit is always with us in the songs. In the beginning, music brought us together, and now, 40 years later, music keeps us together.