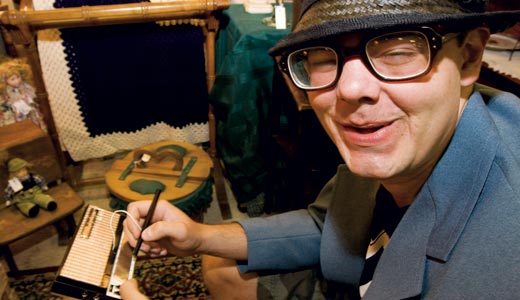 “I’m not a savant or anything remotely related …”

A preemptive shot is fired across the Internet. At www.ronaldjenkees.com, this greeting is a disclaimer. Defying assumptions that he is a recluse, odd or addled isn’t what defines the artist either — but it’s a good start.

Fast becoming a YouTube sensation, Ronald Jenkees, as we know him, is getting more hits than a mosquito zapper in July. For the last few years, the world has come into the mind and room of this twentysomething southeast Jefferson County man. There he creates musical concoctions both spontaneous and controlled, leaping across genre lines and bobbing his head with joyous fervor. His dedication seems to be simultaneously intense and friendly, with banter that lends itself to a hi-tech Mr. Rogers.

His approach to the camera is shy and halting, his attack on the keyboards is playful to manic. With cartoon-thick eyeglasses, lips locked in a sheepish grin and a constantly changing array of hats, the look is decidedly yard sale meets Dr. Bizer — yet somehow cooler than shit.

Perhaps the three minutes that we see of Ronald Jenkees curling around his technology, smiling down on the keyboard like a gleeful scientist, leaves us with the perception that he is in this small room 24/7. But that’s not really true. Right?

His introduction to each piece is usually “Hello, Tubes!” as he bends sideways to welcome the world into his room. Sometimes a ceiling fan becomes a spinning halo as he addresses visitors. Other times, the desire for him to move the camera is overwhelming — not to mention the urge to ask this guy, just who or what are you anyway? But his audience behaves. They can’t get enough.

His fishbowl electronic arsenal consists of two keyboards, a Korg Triton LE and Yamaha Motif XS8. Software is FL Studio 8 (formerly Fruity Loops) he notes on his YouTube site, Ronald Jenkees’s Channel. The anthems, riffs and grooves run quirky to powerful; anything from a radio broadcast traffic report to a sci-fi soundtrack would be served. He is untrained, does not read music (would rather not), and owes a lot to a less-than-satisfactory experience with the high school marching band.

The selection of Jenkees’s MP3s can be downloaded from his website, or you can order his first self-titled CD — the second is on its way, and you can find him on iTunes. His operations are his car trunk, music room, UPS and YouTube. Heavy hitters such as “Messin’ With a Guitar Sound” and “Throwing Fire” are only a couple of titles on the disc.

Needing a dose of flesh and blood, I arranged to meet with the YouTube star at Heine Bros. Coffee. I enjoyed the company of an intelligent, ardent and hardworking young man in a pork pie hat — albeit difficult with a blast of Pat Benatar’s “Shadows of the Night” from the speakers above our table. I joked about the ’80s anthem icon, and his response was “Who is he?” So, he likes Led Zep, but he skipped a few genres.

We each popped a bottle of cold tangerine Fizzy Lizzy and talked about music — the business, the magic and that strange place in between where reality bends like notes on a synthesizer.

LEO: What is the classic fan mail or e-mail response from YouTube or those who download or purchase your music?
Ronald Jenkees: The classic, and most rewarding, message to receive is where I’ve pumped someone up to dust off some old music equipment sitting in a closet somewhere. I remember watching Boonies Mayfield making beats on his MPC on YouTube. He was letting the fun show through without caring what it looked like. His head was bobbing; he was smiling (hip-hop artists are supposed to act tough, right?). To me, that is infectious. I had to jam after watching that video.

LEO: What fans do you have in the music business outside Louisville?
RJ: I’ve had a few artists mention my videos in their blogs. Katy Perry embedded one of my YouTube videos on her blog and wrote the word “hired” underneath the video. I got a kick out of that. Mike Shinoda from Linkin Park also wrote some kind words about my being an independent musician on his blog. I was very appreciative of that as well. I also got to meet Coby from Papa Roach while I was in LA filming the “Pork and Beans” Weezer remix video. It’s cool to know there are some nice rock stars around. I told them I was in town, and they invited me come into the NRG studio where they were recording their new album, Metamorphosis. That was a blast. They let me jam with the drummer for about 20 minutes and then let me crash at their place, where we watched the documentary “Driver 23/Atlas Moth.” A couple of months ago, they invited me to come to their recent Lexington show. My brother and I got to hang out backstage after the show, where they were listening to Dr. Dre on vinyl and offering me lots of advice.

LEO: What was your high school experience? I know you had a teacher that gave you a lot of room.
RJ: I could go on and on about my old band teacher, Mr. Mac. After a friend invited me in the band room to hear me jam for the first time, Mac allowed me to hop in the marching band as a senior in high school without knowing how to read music. He tried to teach me how to read, but I always steered back to my ways of playing by ear. But he continued to lift me up and give me generous solo time in the shows. He trusted me to improvise most of my parts during the actual competitions, so at each one, I played something different. It’s kind of rare to have that freedom in a marching band, I think. He may not have succeeded in teaching me the traditional ways of learning music, but he really helped my confidence as a musician and as a person. Sounds corny, but that’s the best way I can explain it.

LEO: How do you compose?
RJ: Most times, I’ll start a song just by fooling around on the keyboard. I’ll accidentally find something that sounds cool, record that, and then build the tune from there with lots of layers of instruments. Sometimes songs come out really fast. Other times, it will take me months to call something complete. My favorite time to make music is either at night when everyone else is asleep, or when nobody is home and I can crank up the volume without worrying about who I’m bothering.

LEO: Your relationship to the camera.
RJ: Something fun happens when I turn on the camera and play on YouTube. I get a little nervous, but in a good way, and it ends up helping me come up with jams on the spot that I wouldn’t have done if it weren’t for the thought of it possibly being uploaded. Generally, I’m not comfortable in the least bit when someone puts a camera in my face, so my thing is to be me X1000. I go into fun-time entertainment mode. I slowly discovered that that actually helped me play up close and live without feeling like a showoff — it’s just fun, and I let it show. I think people can tell when you’re having genuine fun, even if that includes you cutting loose and being a goof on top of that fun.

LEO: … and to the fans?
RJ: I also look at my short time in front of the camera as an opportunity to encourage others to just enjoy the simple stuff in music. I had just as much fun playing the keys at age 8 as I do now, and I could barely play then. I think one of the problems is so many people are uptight and competitive when it comes to music. I learned that early on as a kid drooling over keyboards in the shops — we didn’t have much money in our household, so all I could do was drool. You’d walk in and play a lick, and some grown-up would come and play it “correctly.” That’s cool if you’re being encouraging with it, but if not, get out of town, for real. I want to be the opposite of that for at least a few people who get what I’m doing and why I’m doing it. I’m having fun with music for the sake of having fun.

LEO: What is your ultimate goal as a recording artist? What about live shows, or is that not in your realm?
RJ: After I get done with my second CD, I think it would be fun to try to get some major placement. Some channels have opened up for me in some different places, so it’s worth a try. It’s still a shot in the dark to have a major artist use your music, but I think it would be fun for that to be my main focus for a while. Despite what it probably looks like on YouTube, I think I’d rather be a behind-the-scenes kind of guy focusing on making new music and producing. I’m not ruling anything out, but right now my interest is more in the production of music rather than the performance. YouTube is great because it allows me to play around in both of those worlds.

As far as an ultimate goal, I think it would be really cool to be the person that came up with a song that most people on the planet have heard and hopefully enjoyed. To turn on the radio at some random time and hear your musical thoughts being played, that must be an amazing thing.