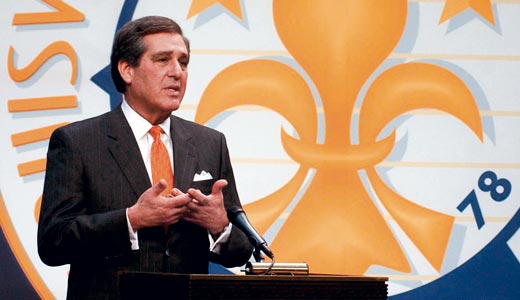 Filled with longtime supporters, potential successors and Metro government officials, the lobby at the Kentucky Center for the Arts held a crowd of nearly a hundred people who applauded in a low rumble as Louisville Mayor Jerry Abramson, joined by Gov. Steve Beshear, walked to the lectern. With his wife and son in tow, the mayor bounced around the room, all smiles, hugging and shaking hands with almost everyone.

It had been confirmed Sunday that Abramson was forgoing a possible sixth term as mayor to join the governor’s 2011 re-election campaign. Beshear said he considered only one man to replace Lt. Gov. Dan Mongiardo as his running mate — Abramson, whom he called one of America’s finest mayors before listing a litany of accomplishments.

The decision to take the plunge into statewide office was based largely on their mutual respect and longstanding friendship, both said. If the governor hadn’t asked, Abramson would have run here again, although it would have likely been a bumpier campaign trail given the growing criticisms, lower approval ratings and budget difficulties, which didn’t make the decision to join Beshear tougher.

“I wanted to be Steve Beshear’s lieutenant governor. That’s why I stepped away,” Abramson said. “It’s his leadership and our friendship that made a difference for me.”

Abramson has served as Louisville’s mayor 20 of the last 24 years, but over the next 18 months his attention and time will be split between running the city and fundraising throughout the commonwealth.

“I don’t think we will necessarily lose anything while he’s on the campaign trail. And I don’t think it will be detrimental to have him being in Frankfort,” says Chris Cieminski, chairman of the Louisville Downtown Management District’s board of directors. “But in a lot of respects it will be a loss for the city because he’s such a huge cheerleader for our community.”

Optimism is something Abramson might always be connected to in Louisville’s memory. The mayor said when he first filed to run for office in 1984 the city held “a can’t-do attitude” about itself, and he hopes he’s been a small part of overturning that.

Since city and county governments merged in 2003, Abramson has spearheaded an unprecedented renaissance downtown, Cieminski says, which includes projects such as Slugger Field, Waterfront Park, Fourth Street Live and the downtown arena. Those developments haven’t been without controversy or cost to Abramson’s popularity, particularly the sweetheart deals given to The Cordish Cos., developer of Fourth Street Live and the forthcoming Center City. Those deals remain a lightning rod for the administration, both in terms of public opinion and the Metro Council.

Abramson has always been a larger-than-life figure, which leaves some wondering now whether his success is owed to the power of his personality, the power of the office or some combination thereof. Perhaps it’s the anxiety of the unfamiliar, but there’s a general concern among civic and business leaders that momentum could slow once the mayoral continuity is broken. That only adds pressure for the next mayor.

“They’re going to be big shoes to fill, but there are talented people here and hopefully the cream rises to the top with a new vision,” Cieminski says. “Whoever steps into his shoes, it’s real important they remain positive to continue to move the city forward.”

The jockeying for Metro Hall has already begun as the administration’s voice draws quieter. For the next year and a half Abramson will enter unprecedented territory as a lame duck mayor, which gives the Metro Council and mayoral candidates a larger portion of the bully pulpit.

“I can’t even imagine the term lame duck being used effectively with him,” says Chad Carlton, a spokesman for the mayor, adding that Abramson isn’t worried about losing authority or sway. “If he’s a lame duck, he’s moving to a bigger pond with a lot more room to paddle.”

Councilman Kevin Kramer, R-11, chairman of the Republican caucus, says Abramson’s last 18 months in office will give the minority a stronger position to work on its agenda. This year council Republicans have spearheaded ordinances establishing a 24/7 anonymous tip line and e-transparency for Metro government expenditures.

“When the person at the top steps away, the issues tend to be more focused on the council,” Kramer says. “The question becomes not so much about what happens from across the street anymore. Because without the influence of the mayor’s administration — what’s going to happen to these issues now?”

Abramson’s last 18 months will be spent tying up loose ends, such as the stimulus funding for Louisville At Work, finalizing the $70 million for MetroSafe and opening the waterfront arena. Then there are the nuts and bolts of a transition to a new administration. Abramson will not endorse a candidate in the Democratic primary, although he’s pledged to support the nominee.

There’s a general feeling that as Abramson exits Metro government, the stage is open for a wider range of discussion that previously fell on a deaf ears. Jefferson County Republican Party Chairman Brad Cummings tells LEO Weekly as time passes, Abramson’s voice won’t be as important as it once was.

“I would imagine leaders around the city are going to be much more wiling to speak out, especially the people who are running for mayor,” he says. “If there’s ever a time to speak out it would be now.”

It will be difficult to marginalize a man who could potentially oversee economic development in state government and who Beshear says will be an active lieutenant governor, but that all assumes a Democratic victory in 2011.

Whether you’re sad to see the “Mayor for Life” go or shouting good riddance to a man who overstayed his welcome six years ago, just about everybody we talked with has an opinion on Jerry Abramson. LEO Weekly went around the Metro to survey the public’s reaction to the announced departure. Here’s what we heard:

“It really seems like he’s been mayor for life and the decision didn’t surprise me. I really thought he would retire from politics, but he has done a lot for Louisville and you really can’t fault him for his efforts. You may not agree with what he has done, but he has done a lot for Louisville in terms of bringing business this way. Right now things seem kind of stagnant with the current governor and I’d like to see somebody different up there.” —Tom Gavin, 50, Highview

“Abramson really upset me when he made that negative comment against the black community, but I really feel like he has done a great job for us. He would be very good for a position of higher leadership.” —Maxine Hazley, 60, Valley Station

“The decision surprised me because I didn’t realize he and Beshear were that close. I don’t think there has ever been a governor from Jefferson Country but maybe they were priming him for that. He is a very intelligent and very capable man and I think he would make a heck of a governor. I’d be surprised if he could carry a lot of votes out in the state since he’s from Louisville. A lot of local guys have never even attempted to run.” —Dennis Lynch, 56, Hikes Point

“Based on his service record and the fact that he has been mayor for so long, I’m surprised he didn’t make the jump earlier. I think it is a good decision for himself and the commonwealth.” —Amy Carrico, 35, Oldham County

“There are probably worse options for lieutenant governor. It is hard to say how good he will be as a number two based on the fact that he has been number one in Louisville for so long. The quality of the move remains to be seen, but it is definitely strategically smart on Beshear’s part. Abramson has been pegged nationally already with a lot of the stimulus money coming in and he took part in a lot of those focus groups.” —Chandra Napora, 38, Clifton

“I’m sure that people in Louisville will hate to see him go, but how are you gonna stop somebody? It’s definitely a positive move for him, maybe not for Louisville. But everyone wants to advance in their life. I’d definitely want him on my ticket.” —Cindy Hackemack, 48, New Albany

“The best time for him to jump is right now. Right now I think his support in the city of Louisville may be waning or it is at least getting polarized, and if he’s gonna make a move, now would probably be the best time to do it. He’s done a lot of good and bad things for the city. I’m a smoker and the whole smoking ordinance was a problem for me. I think this could do some good things for the commonwealth, but a lot of the things that he gets away with in Louisville probably won’t be tolerated out in the state.” —M. Price, 36, Southwest Jefferson County

“I think he has done a pretty good job as our mayor. With the problems of crime and taking care of the streets, I think he’s done the best that he could. It doesn’t really surprise me that he has decided to jump. I think if I were a politician I would be looking to climb the ladder myself. Our streets are a little safer now than they were, and I think he has done the best he could in the situation. He’s only one man.” —Tim Gallagher, 47, St. Matthews