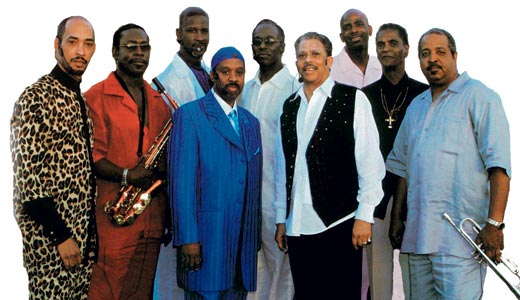 Several months ago, when pilot Chesley B. Sullenberger, aka Sully, safely landed his U.S. Airways plane onto the Hudson River, an awestruck nation called it a mixture of fast thinking and even faster reactions.

“We have a song that’s called ‘A Soft Place to Land,’ and Sully … I assure you, was looking for a soft place to land,” he says by phone from Dayton, Ohio. “And we wrote this song about three or four months before that event even happened.”

Formed in 1959, the band has gone through more lineup changes than Menudo. Williams joined the band in 1972 and became its leader in 1983. Though the Dayton native is fortunate enough to be an Ohio player, he briefly attended Kentucky State University to study music.

On July 4, The Ohio Players headline the Waterfront Independence Festival at Waterfront Park. That may not be the only music they plan on making while in Kentucky; Williams says that the band plans to record while in Louisville. In the next month, the Players will drop new material, and a Kentucky performance is possible.

Williams talked about the new tunes, being a legend and how The Ohio Players’ music is reflective of whatever generation they happen to be recording in.

LEO: “Love Rollercoaster” and “Fire” are now staples at proms and weddings. What is it like to be a member of a band that has achieved this status?
James “Diamond” Williams: First of all, it’s a blessing for us to have been able to write songs that are still being played and still frequently used in movies and commercials and TV shows. It’s just unbelievable to even be around playing these songs some 36 years after they’re recorded, and still having just as much fun playing them as people are that are listening to the tracks. It’s just a beautiful thing. Never once did I ever imagine … and I say this on stage live … that I would be in this position some 35 years, or 36 years after having wrote those songs. And what I mean by that is just, you know, when I was 24 years old and 29 years old or whatever, those years were during that period of time, I just thought that I would be off into doing some different things in life.

LEO: What do you think of the modern interpretations and usages of your classic music?
JDW: To imitate is the highest form of flattery. And so we look at it like that. Of course there’s some that you say, “I wish you’d never touched that.” But just the fact that they wanted to play it … you know, out of all the music that’s out here and that’s been created, in the United States and worldwide, for somebody to want to play one of your tracks, or to remake one of your tracks, it’s just absolutely marvelous. I’m sure a lot of people are aware of the Red Hot Chili Peppers doing the remake of [“Love Rollercoaster”] in “Beavis and Butthead Do America.” When we found out that they were covering the song, it was wonderful. Of course, there could have been reasons that we said, “Why didn’t they call us?” But just the mere fact that the Red Hot Chili Peppers wanted to cover the song, and it was so well received, it’s just a marvelous thing.

LEO: Thirty-seven years is quite a stretch of time to be dedicated to one thing.
JDW: Not unlike a doctor or a lawyer, or even perhaps a household mom who always grew up wanting to have kids and said, “You know, I’d like to raise a family,” and then some 50 years or so later having had two or three kids and whatever that brings about, you have done something that you’ve always wanted to do and loved, and have accomplished that. So it’s quite similar to a number of professions that people get into; completely unlike working in any kind of industry or anything like that because people generally retire from that type of job … we kind of just hang out.