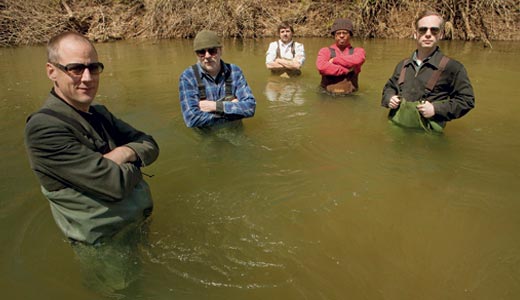 Appreciating the depth, calculation and execution of Tortoise is an easy task. Implementing elements of classic and disparate genres, this Chicago ensemble — now in its 20th year — continues to put on a clinic with its newest album, Beacons of Ancestorship, released last week on Thrill Jockey. Dan Bitney talks about his degree in indie rock, boundless exploration and the influence of J. Dilla.

LEO: One overriding goal of musicians/bands is to write beyond their influences and create their own sound. It feels like Tortoise always has had its own sound, no?
Dan Bitney: Well, not entirely. I think when the group started, there was a feeling of wanting to get away from the guitar-led rock aesthetic, and people were starting to listen to more different styles of music, jazz, dub, modern classical, concrete, African, electronic abstractions. Also with the core of the group being a double rhythm section using mallet instruments and electronics, it gave the illusion that this sound came out of nowhere. Another difference is that this was and is a collective as far as writing the tunes, so our songs are never really one person’s idea realized but the group adding and changing ideas.

LEO: I’ve read that you were pretty excited about bringing back some material off TNT into the mix. What’s it like digging back into the past right now for a live show? Is there new energy?
DB: It’s hard to relearn songs; you’d think it would be easy. I’m excited to play some of the older songs but a lot more excited to play the new ones.

LEO: What musicians are influencing you right now/that you’re listening to heavily?
DB: I tend to listen to a lot of music from Brazil — Jobim, Marcos Valle, Edu Lobo. Old soul, old reggae, I guess the most contemporary stuff would be dubstep, Skream, The Bug, Dilla, Pit Er Pat. There’s a group of Puerto Ricans that play in a garage down the alley from my house that are really good lately, kind of psyche-folk Rican.

LEO: Did you have any formal music education? If so, what was it? If not, how did you come to play such a variety of instruments (marimba, sax, etc.)?
DB: I got my degree in indie rock in the ’80s. I had some great teachers — Husker Du, Black Flag, the Meat Puppets, Bucky Pope, Robin Davies, to name a few. Really the house I grew up in had a guitar, piano, cardboard boxes as drums. Later, joining middle-school band class, the teacher steered me away from drums and into the saxophone section. So yeah, I’m not really that good at most instruments, but I feel it’s an asset to be able to switch it up while working with Tortoise. Ok, wait … I’m killing on drums lately.

LEO: Six years passed in between Beacons and the band’s last studio album. Is that evidence of a change in TRTS’ songwriting process?
DB: Yeah, we couldn’t do it. People were doing other projects — even Tortoise was kind of busy with a box-set reissue and touring. We were commuting to European festivals every weekend last summer, it seems. I did feel that we needed to re-learn how to write together again, and it wasn’t easy. I think one difference is that now, it doesn’t seem like an idea is inappropriate for TRTS, whereas in the past we might not have had abstract hip-hop in the mix.

LEO: I read that one of the songs was influenced by J. Dilla. How has beatmaking affected the writing of Beacons?
DB: Well most of us make little demos of ideas to bring to the sessions on our computers with programs that make it so easy to write beats or melodies, so that’s all much easier than cassette recorders and broken drum machines. Dilla’s influence would be the un-quantized raw pulling of a feel.
I had two ideas I brought in that were left over from the Bumps project: “Northern Something” and “Gigantes.” These I made on my computer then brought in and taught to the other drummers. These went through many mutations before they ended up as finished.

LEO: You, John Herndon and John McEntire collaborated with the Bumps project. Any plans to release anything in the future?
DB: Yeah, we really want to do more. We’re talking about more realized tunes with bass lines and samples, maybe something we could stand a chance at playing live eventually. But that was a fun project to do, and to have Stones Throw put it out was an honor to me.