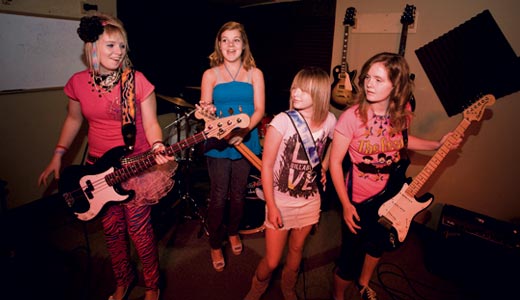 The members of What’s Up.photo by Spencer Jenkins

The band members grab their instruments like old pros as they take the stage. Bassist Elise Hagan crosses to meet lead guitarist Clare Hagan. They chop at their instruments like they’re competing in a duel. Meanwhile, Emily McConville strums along coolly to the side with her rhythm guitar, and Lizzie Wiseman holds the beat.

It’s easy to forget not one member of What’s Up is old enough to drive a car.

Groomed by two full-time coaches, Jeremy Reddick and Chip Adams, bands like What’s Up hone their skills and practice in a professional atmosphere at the Louisville School of Rock on Watterson Trail in Jeffersontown. Coaches aid in choosing songs and writing original music. The school also sponsors live gigs in which the bands may play. Students as young as 9 can form a band, as can those eligible for AARP benefits.

“I try to make sure they learn something, but have a good time,” Adams says as Elise braids his long, wavy hair habitually, as if she’s done it countless times before. “Rewards are there for the hard workers. The harder they work, the better their futures will be.”

If the band’s past accomplishments are any indication, the future of What’s Up looks promising: They’ve played more than 50 gigs locally, recorded a demo and are writing an entire set of original music. The kids even rubbed elbows backstage with Joan Jett at last year’s Kentucky State Fair.

“We learned a lot about stage presence,” says Clare, 13. “We started paying attention to what people do.”

Clare has found success as a solo artist. She wrote a song to highlight the effects of poverty on children that won first place in a contest sponsored by the Catholic Campaign for Human Development. In honor of her national prize, she’ll perform the song in Kansas City in front of 20,000 people at the National Catholic Youth Conference in November. She also won first place in “They’re Going to Make a Big Star Out of Me,” a singing contest held during Abbey Road on the River.

Other students at LSOR are still honing their skills. Six-year-old Trey McAlmont and 9-year-old Dylan Yates both play drums. “I like this,” Dylan says. “I can hit things and not get in trouble.”

“Trey’s been beating since he was a little tot,” his mother, Dee McAlmont, says. “He would pull out pots and pans when he was still crawling and hit tin measuring cups.”

Coaches often tie lessons on stage presence and professionalism into their sessions. “You have to have your act together,” Reddick says. “I tell them what to expect and how to conduct yourself at a gig. I want them to be good citizens and role models, because they’re on stage.”