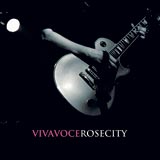 Sometimes you don’t need to reinvent the wheel.

For superb, no frills rock ’n’ roll records, husband and wife duo Kevin and Anita Robinson, aka Viva Voce (Latin for “by live voice”), have always been a go-to. Rose City marks the group’s third album, and it really doesn’t matter that there’s no discernible difference between this album and their earlier discography.

Viva Voce are adept at making the familiar sound fresh. A crafty mix of classic 4AD-style dream pop, fuzzy slacker rock and absinthe-fueled Western sweeps, Rose City is a big-sounding album that invokes The Jesus and Mary Chain between their noisy genesis and the polished Darklands or mid-career Sebadoh, with seductive female vocals to boot.

However, it’s the ornate, lonesome, acoustic full-band campfire sing-along of “Octavio,” and the trippy, foreboding calypso of “Flora,” where Viva Voce truly demonstrate a songwriting prowess and purveyor of ominous moodiness that elevates them above the usual indie-pop camp. Rose City isn’t earth-shattering, but it will serve as a well-written soundtrack to summer night driving and slow ridin’.