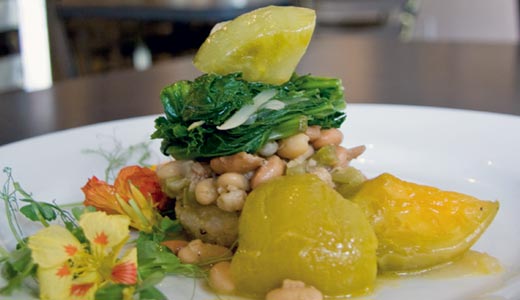 The top current food trend can be summed up in one word: local. The Obamas have planted a garden at the White House. Farmers markets are all the rage. Even big chain groceries spotlight a bit of local produce.

“Animal, Vegetable, Miracle,” Barbara Kingsolver’s account of eating homegrown and regionally produced food, has gotten me on the local bandwagon, too. Enter The White Oak, now open in the East Market Street space formerly occupied by Artemisia. Chef and co-owner Allen Heintzman (who was chef at Artemisia from 2005 to 2008) said on LouisvilleHotBytes.com that the restaurant would feature “Kentucky comfort food” and “almost 100 percent local” ingredients. Locavore and progressive, like many of you, I had to check it out.

The long, narrow main dining room has undergone more than just a name change. Gone are the dark red walls, replaced with lighter colors, soft yellow and fresh green tones that complement the works of local artists on the walls. Like to eat al fresco? The shady patio remains an option.

My friend Jennifer and I chose a booth in the main dining room, and our server, Carrie, promptly described the evening’s five featured side dishes and answered our questions. She was well informed about the menu, preparation methods and the chef’s vision. She described how Heintzman, a transplant from New Orleans, aimed to combine his appreciation of French cuisine with down-home Kentucky country cooking.

The Kentucky emphasis is clear on the menu, which spotlights classic comfort food featuring “farm partners” such as Kentucky Bison Company, Kenny’s Farmhouse cheeses and Fox Hollow Farms. Appetizer prices range from $5 to $11. Most entrees are in the mid-teens.

I’m usually a wine drinker, but hot weather drew us to the specialty drink list of summer cocktails featuring such brands as Woodford Reserve bourbon and El Jimador tequila. (Well, Louisville-based Brown-Forman is technically local.) On our server’s recommendation, I chose the Raspberry Lemonade Chiller ($10), a refreshing combination of Finlandia vodka, Chambord and lemonade on ice. Jennifer got a Tangerine Sunburst ($8), a blend of Finlandia tangerine vodka with pomegranate and fresh-squeezed orange juice.

When our appetizer, the local cheese plate ($11), arrived, our server thoroughly described the selections, which included locally made brie and white cheddar. My favorite by far was a yogurt cheese from the Zimmerman farm in Liberty, Ky. I expected a soft, tangy cheese that tasted like, eh, yogurt, but it was actually firm and quite mild. Sweet tomato jelly, toast points and julienned vegetables complemented the cheese plate perfectly.

Our entrée decision was much more difficult. Jennifer is a vegetarian, so she’s used to settling for a standard-issue Portobello burger. But The White Oak offered two more interesting vegetarian entrées: a pasta dish (which we later discovered was about to rotate off the menu to make room for a lighter summer dish of stuffed vegetables) and a ragout of beans and greens with herbed grit cake and stewed green tomatoes. She opted for the latter, choosing green beans with tarragon butter as her side dish.

It was a hard choice, but I finally selected “Louisville fried chicken” ($16) over the cornmeal-dusted catfish ($15) with house-made hush puppy and tartar sauce. I picked white cheddar grits and honey carrots as my two sides. (The other options were asparagus with lemon-dill sauce, green beans and baby beets with a salad of microgreens.) We also ordered a second round of drinks. This time I selected Jack Daniel’s with ginger beer ($9), another of the summer drink specials.

Both our entrées were fabulous. Jennifer praised her dish for having a perfect balance of sweet and tangy flavors. I tried it and agreed, also noting a nice mix of textures, from the stone-ground grits to the tender-stewed greens. Even a dedicated carnivore could appreciate this thought-out vegetarian dish.

My entrée consisted of two large pieces of flavorful chicken coated in a thick, peppery flour breading. The peppery white cheddar grits were a perfect match, their texture just right — not too creamy, not too coarse. My other side dish was also exceptional: a spray of small, artfully presented carrots whose natural sweetness was complemented with a honey-butter sauce. Everything tasted good, and it looked good, too. Portion sizes were sufficient but not overwhelming.

Of course, the ultimate comfort food is dessert, so we left room for more indulgence. Selections included a seasonal fruit cobbler (temptingly described as “strawberries with a topping somewhere between a biscuit and a sugar cookie”), two sorbets from local producer Gelato Gilberto, and chocolate-chip bread pudding with bourbon sauce. We chose chocolate gelato ($6) and the bread pudding ($6). The gelato was creamy and rich, yet light enough for a summer dessert. The dense bread pudding was studded with plenty of slightly melted semisweet chocolate chunks.

The tab for our dinner for two came to $92. In light of our server’s knowledgeable, prompt and friendly service, we added an $18 tip, bringing the total to $110. You could enjoy The White Oak for much less, as our indulgent dinner included a cheese plate, two entrees, two desserts and four cocktails.

As we finished eating, Chef Heintzman stopped by. We raved about our dinner and asked how he finds local producers. Some he discovered during his time with Artemisia, while others were passed on via word-of-mouth. It’s worth all the effort: No food factory can replicate the commitment of a farmer who walks the soil and digs the earth every day. No trucked-in (or flown-in) ingredient can match the flavor of something that’s just come out of the ground.

Best of all, The White Oak demonstrates that great food doesn’t need to be fancy. All it takes is time-honored techniques and simple, carefully selected ingredients. Fortunately for us, these ingredients — and a chef who knows how to work with them — are right in our backyard. —Paige Moore-Heavin

Panini: Not just for lunch anymore

If you thought the breakfast burrito was a great concept, you’ll be ready for the intriguing break-your-fast delight recently rolled out at Heine Bros. Coffee on Frankfort Avenue. Like the coffee shop’s line of lunch paninis, the breakfast panini ($5.90) is packaged by Lotsa Pasta and grilled to your order by Heine’s friendly baristas. Take your choice of bacon, egg and cheese; egg and cheese; sausage, egg and cheese; or roasted veggies and cheese. Back it up with a tall espresso drink or cuppa Heine’s finest and enjoy! —Robin Garr

Local beer lovers are abuzz with the news that Sergio’s World Beers, the Shelbyville mecca of brews that features more than 500 of the world’s finest suds along with decent Mexican chow, will open a Louisville branch soon. According to Sergio’s website (www.sergiosworldbeers.com), they’ll soon move into the Butchertown facilities at 1605 Story Ave., that long housed the beloved “Dirty” Min’s cafeteria, followed by a string of short-lived eateries. —RG