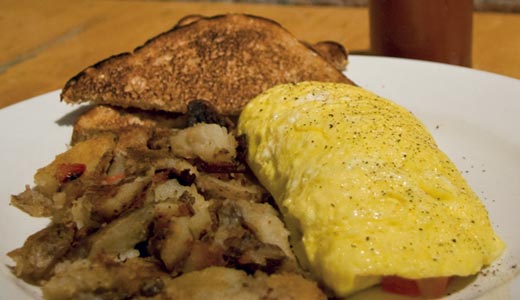 Where is it written that eggs must be reserved for breakfast? In my culinary Day Timer, an omelet makes a splendid date for dinner. Scrambled eggs go down well anytime. And bacon! There’s no hour of the day or night when the thought of smoky, salty bacon won’t inspire a hunger pang.

On the other hand, I’m equally flexible about non-traditional savories at breakfast time. A slice of pizza, a piece of cold fried chicken or a scoop of cottage cheese filched from its tub while I stand in front of the open refrigerator door: These alternatives, too, make a perfectly acceptable way to start the day.

Now, to huzzahs from breakfast lovers everywhere, North End Café makes all-day breakfast easy. North End’s new menu still features its popular favorites, but there’s no longer a time limit: Whether you prefer to tickle your taste buds with tapas, eggs and hash or a full-bore entree, it’s all available to you whenever the restaurant is open: breakfast, lunch or dinner Tuesdays through Sundays.

Under the guidance of Chef Christopher Seckman, North End has grown in popularity and in physical space since it opened in a nicely renovated Clifton camelback shotgun house in April 2003. Three years later, it expanded into another shotgun next door, plus a popular patio for outdoor dining in season.

Exposed brick and shiny hardwood, dark overhead beams in an upper room and local art define the character of the place; fresh flowers and shiny wood tables make for a casually artsy scene that’s a natural fit for Clifton.

Tall old-house windows admit plenty of daylight. Undraped tables and hard edges make it a bit noisy when it’s crowded, as it usually is in this popular place.

The menu has changed a bit over the years, but remains generally consistent in its eclectic, international style, with an emphasis on small plates, tapas and, of course, outstanding breakfast dishes.

Seckman holds a strong commitment to fresh, seasonal ingredients, relying on local farmers and choosing organic produce when possible. Many of the vegetables and herbs served are grown in the restaurant’s garden in Simpsonville, Ky.

About 10 tapas (our server described them as “appetizers”) range in price from $6 (for hummus) to $15 (for a five-selection cheese board). There’s a wide choice of salads, sandwiches and, of course, that tempting selection of breakfast fare, with well over a dozen options including the traditional (steak and eggs for $13.99, the two eggs and fries “basic breakfast” for $5.50, and a variety of pancake stacks) and some Latino-accented choices, including migas ($6.99), a Mexican mix of eggs scrambled with blue corn tortilla chips, jalapeños and cheddar; and mini breakfast tacos ($2.99), featuring scrambled eggs, potatoes, cheese bacon and fresh salsa folded into a soft flour tortilla.

About a dozen entrees are from $10.25 (for a curry sauté) to $22.50 (for scallops and grits, North End’s upscale take on the Down East shrimp and grits that’s become a staple of Louisville bistro fare — it calls on diver scallops in place of the usual crustaceans, with cheddar grits, bacon, caramelized onion and shiitake mushrooms with tarragon beurre blanc).

We dropped by for a mid-afternoon brunch, and I was delighted to find omelets atop the “eggs and hash” section. Each day brings a different filling, chef’s choice, for the “meat omelet” and “vegetable omelet” (both $9.75).

This day the meat was fish, specifically a shredded ration of smoked salmon — not lox but warm-smoked — and that was just fine with me. It was sauced with a subtle dill cream cheese mousse that made a great match with the salmon, and it came with plenty of North End’s deliciously chunky, red-skinned potato-and-onion hash browns. We lingered over coffee and a bring-your-own Sunday New York Times and didn’t feel any pressure to move on during this quiet hour, although you probably wouldn’t want to hog a table during the busy Sunday lunch period.

We came back on a weekday for the savories and were just as pleased.

A shared order of hummus ($6) from the tapas menu was as good as I’d expect in an ethnic Middle Eastern joint. Creamy, thick and salty, fine hummus was garnished with a half-dozen small toasted pita triangles, lots of black pitted olives, not your insipid canned stuff but Niçoise or similar; crisp baby green beans and long, thin carrot slices.

Another tapas choice, sesame seared tuna ($9), was perfect, one of the best fresh tuna dishes I’ve enjoyed outside a top sushi bar. An oblong of fine tuna was coated in black and white sesame seeds, seared just around the edges with the center left sushi-rare, cut into a half-dozen bite-size squares. It was served with a sweet-tart pineapple chutney, a bit of mesclun lettuce, and an artful brown-and-white edible checkerboard design of wasabi cream and soy. Taro chips, mentioned on the menu, were AWOL.

I chose curry sauté ($10.25) from the entrees menu, choosing the tofu option in favor of chicken to ensure that no animals would be harmed in making my lunch. A large bowl came filled with a steaming, spicy coconut-milk soup, loaded with triangular chunks of pan-fried tofu and lots of healthy veggies: shiitake mushroom julienne, zucchini and yellow squash, broccoli florets, onion, spinach leaves, red bell peppers and a few peas.

Served with a turban-shaped mold of white rice on a small saucer and an undersize teaspoon, it looked great, but how was I to eat it? There was no room on the saucer to ladle on the curry, and the spoon was too small for ladling anyway. Dump the rice into the curry? Eat the curry and rice separately? It was a tough call, but I upended the rice into the soup and ate the combo with the mini-spoon, tiny bite by tiny bite, finally comprehending what T.S. Eliot meant about J. Alfred Prufrock measuring out his life in coffee spoons.

As we finished our lunch, the server came out, dropped our check on the table and didn’t mention dessert. We inquired, she recited a few options, and flourless chocolate orange cake turned my wife’s head like Linda Blair’s in “The Exorcist.” She later said desserts are made in house … but it seemed odd that they won’t offer dessert unless you ask. Indeed, service in general was like that: friendly, polite but distracted and a bit spacey.

AHOY! Fish Hutt will host a “We Believe Jamboree” with a dozen bands and musicians from noon to 9 p.m. Saturday, July 25, at the restaurant, 2902 Bardstown Road.

Admission is free, and all the restaurant’s profits for the day and proceeds from the sale of “Beading to Beat Autism” bracelets ($3) and other event activities will go to the Michala Riggle Beat Autism Foundation Inc. Michala Riggle, a 12-year-old from Louisville, has won national publicity with her ambition to inspire donations for autism research. She has reportedly raised more than $350,000.