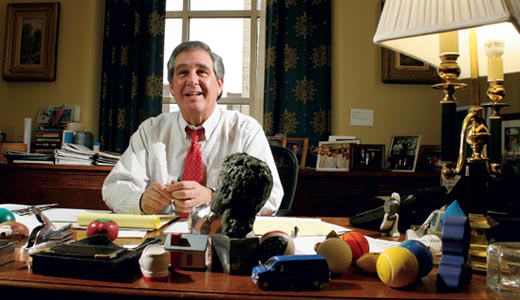 It was 1985, and a young lawyer named Jerry Abramson had just been elected mayor of Louisville, a city that had lost its edge. Urban renewal and suburban sprawl had decimated downtown, once the beating heart of a booming river town. Abramson needed to figure out what it meant to govern and, ultimately, to rebuild.

So he traveled the state and country, visiting county judges, clerks, mayors and other elected officials. That first trip would establish the Abramson approach to both campaigning in and governance of the state’s biggest city: listening. Gregarious when he’s getting his way, Abramson is a knock-on-doors kind of politician who often goes out of his way to make face-to-face connections.

Abramson, the longest-serving mayor in city history, announced Monday that he will forgo a run at a sixth term. He began his new gig this week: campaigning as a candidate for lieutenant governor on the re-election ticket of Democratic Gov. Steve Beshear.

During his mayoral run, Abramson has been both praised and maligned as the city’s chief cheerleader. There is little question he has advanced the international profile of this mid-major American city, as well as begun the arduous process of rebuilding its downtown.

“I think the mayor is very adept at working with businesses and understands what it takes to bring businesses and relocate businesses [to Kentucky],” says Mark Riddle, who managed Abramson’s 2006 re-election campaign. “He’s done it for decades there in Jefferson County.”

But critics say he favors cheerleading over substance and policy. In the past several years, amid the city’s most trying economic plight in recent history, Abramson has made tough and unpopular cuts in city services and amenities, all while maintaining a positively exuberant attitude about where the city is headed. That has rubbed enough people the wrong way: an astronomical approval rating across the political spectrum has dropped considerably, and his relationship with the Metro Council has become strained after a scandal in the city’s housing department, a veto of fair labor standards for construction of the downtown arena and a taxpayer-funded sweetheart deal for a major downtown developer already swimming in sweetheart deals.

Yet Abramson still maintains an approval rating most politicians lust over, and that’s attributable to his personality, which most describe as a mix of convivial and, when he needs something done and is finished talking about it, brutish.

Most people acknowledge that the advancement of a political agenda is often the result of subterranean forces. Deals happen outside the public eye. By all accounts, Abramson is this brand of politician. That is, he is a negotiator, a dealmaker — not a tyrant.

On the other hand, Beshear — though some of his ideas may be sound and sensible — is obviously not a salesman. The first-term governor has failed twice, in dramatic fashion, to advance an initiative allowing slots at racetracks, an economic strategy to ward off what are now annual budget shortfalls (this year the legislature covered a $500 million shortage by dipping into the rainy day fund and cutting funding to government agencies).

Instead, Beshear has run up against Republican Senate President David Williams, an arch-conservative with a Great White’s instinct for blood in the water and the heart of a whiskey-bent used-car salesman. Williams and his merry band of legislators have tossed everything from economic arguments to morality plays at Beshear’s agenda, rubbing on many Kentuckians’ primordial fear of advancement and stopping the governor in his tracks.

The popular thinking is that Abramson can match wits with Williams and propel Beshear forward — that is, if the two are elected in 2011.

“One of the mayor’s great strengths is making an argument and making a case for what needs to be done,” Riddle says. “And I think particularly on the some of the issues, be it expanded gaming or bringing companies in to invest in the commonwealth, I think he will be a tremendous asset to the Beshear administration, having a real partner in helping articulate a message and really give a new voice and new energy to some of the ideas the governor has laid out.”

In this context, it is instructive to look at how Abramson has worked with the 26-member Metro Council, a disparate group where, despite his party’s majority, he has found regular opposition.

Some council members, particularly those in the minority, say Abramson hammered his agenda from Metro Hall instead of working to build consensus.

“He treats us with some level of indifference,” says Kelly Downard, R-16, who ran against Abramson in 2006 and was the council’s first Republican president. “His ability I think to sell the agenda to the public, he’ll be good at that. I don’t know about his interaction with the legislative branch. He hasn’t worked with us a lot since merger anyway.”

Rick Blackwell, D-12, is also a former council president. He says he maintained regular dialogue with Abramson on major issues, and that members of the mayor’s administration worked regularly with the council on agenda items. Blackwell says Abramson is a listener even when he disagrees, but he tends to get his way. He cites the downtown arena as an example: Although the project was politically unpopular in many council districts, Abramson was able to sell most council members on its overall value for the city and rebuilding downtown, something a bit more esoteric than dollars and cents.

“There was a big difference between when people in the administration were trying to build consensus around things — which was ultimately their job, at least in the first rounds,” Blackwell says. “When he stepped in and he had conferences with people or met with people or groups of council members, I think it made a big difference.”