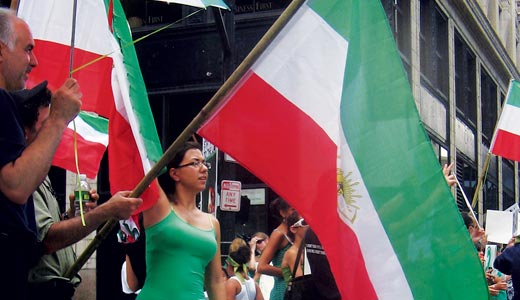 The shade offered by Marjan Javid’s umbrella does little to mitigate the intense early afternoon sun; beads of sweat have collected on the bridge of her nose, and her slow movements and speech indicate the early signs of dehydration. Maybe that’s because the umbrella itself — a flimsy thing, patterned in green, white and red and featuring a lion wielding a sword — is as much for show as it is for practical purposes. In her other hand she holds a lime-colored sign that reads, “We Support Democracy In Iran.”

“I’ve been out here for a while,” she says, shifting her weight onto her other foot, “but I felt it’s important to be here and support my heritage as an Iranian-American.”

Javid’s father fled his hometown of Shiraz shortly after the 1979 Iranian Revolution, which deposed the U.S.-backed Shah and instituted the confusing, increasingly brusque and authoritarian theocratic government responsible for destroying the country’s 2,500-year tradition of human rights, as well as Jimmy Carter’s career. Fearing something ugly was about to rear its head over the country, her father emigrated from Iran to the United States, his family in tow. He met Javid’s mother in California, where the 19-year-old protestor and student was born.

“Shortly after the revolution, plenty of people were leaving,” she says, citing the citizenry’s collective paranoia regarding the Ayatollah Khomeini’s freshly minted fundamentalist regime as reason enough for her father’s exodus. “He takes trips back and forth … but he hasn’t regretted moving here since he left.”

Javid, who longs to visit a democratic Iran, was but one of 60 similarly color-coordinated, flag-rearing and largely Iranian-Americans who gathered before the steel-and-glass roof of downtown Louisville’s Fourth Street Live last Friday to peacefully protest the injustices perpetrated by Iranian President Mahmoud Ahmadinejad’s Revolutionary Guard in the wake of a hugely flawed national election. The significance and true nature of those injustices remain a mystery to the average American, whose primary exposure to the unfolding situation consists of cable news anchors playing with Twitter.

“I have family in Tehran, and I’m about to leave soon to visit them,” says one man, wearing a surgical mask emblazoned with a black X. “And I’m afraid. I’m really afraid.”

The masked protester — whose sign reads simply, “Human Rights” — asks that I refer to him as Ali; he refuses to give his real name.

“[The current Iranian government] is searching the Internet for us,” Ali says, “identifying people from protest videos on YouTube and putting them and their families in jail, or worse.” He goes quiet for a moment, then adds: “I just keep thinking of my sister. She’s a doctor in Tehran. I hope she hasn’t been injured yet.” — as if being injured is inevitable, a matter of fact that is at once sobering yet foreign to someone whose idea of domestic revolution is too romantically abstract to comprehend what is essentially the wholesale slaughter of an electorate by its government.

“And please, don’t take my picture.”

Despite this disconnect, there is more that binds them to us — the fat, lazy, blog-reading American — than what can be gleaned from the national media’s atavistic (and now obsolete) portrayal of Iran’s population as a nation of overzealous, AK-toting extremists marching in lockstep with the diminutive Ahmadinejad.

“Iran is very much like the United States,” says Mosen Khani, a local physician who came to the U.S. 32 years ago, laughing. “But I am serious.”

Khani immigrated here to pursue medicine. A tall, broad-shouldered man in his late 40s, Khani holds in his hands a “true Iranian flag,” featuring the lion and the sun, breaking from his eloquent political diatribe to wave it wildly, screaming “Woo!” at honk-friendly traffic.

“We firmly believe in the separation of church and state,” says Khani, putting on a pair of black wraparound sunglasses. “In fact, the writings of [Greek author] Xenophon … about Cyrus The Great heavily influenced one of your founding fathers: Thomas Jefferson.” (He’s right: A cursory Google search shows that Jefferson, indeed, made the Iranian philosopher’s teachings essential reading for early American statesmen.)

“I don’t mean to insult the Arab religious leaders,” he says, “but they’ve been shoving this religious stuff down our throats for too long.”

Over the course of half-an-hour I walk through the crowd, talking to a few more people — like 21-year-old pre-med student and first-generation Iranian-American Fariba Karimi, who appears to be the oldest of five sisters, all of whom came out to show support because, in Fariba’s words, “We’re going through what they’re going through [in Iran] … We are feeling what they are feeling.”

Eventually I am introduced to the organizer of the event, David Kazi. A gray-haired, middle-aged man clad in a gray-pinstripe suit and black ball cap, Kazi emphatically takes me aside and talks for a solid 15 minutes on everything from the farcical nature of the current Republic (“There is no democracy. Their chief aim is to destroy Iran and turn it into an Islamic nation.”), to their apocalyptic rhetoric (“They say want to bring about the [Rapture-esque] return of Madhi, and everything they do is used as a means to justify that end.”), to how the current Iranian flag is nothing more than a sick joke (“The flags you see here, green and white with the lion and the bear — that is our flag. It was the flag of our people for centuries before our government was stolen from us, and it will be our flag again.”).

Kazi has just launched into why the clerics’ time-honored “Death to America” sentiment should be taken literally (“It is not a joke to them. If they ever get nuclear weapons they will not hesitate to use them. It will be the end of us for sure.”) when a woman — Kazi’s wife — interrupts and begins yelling at me.

“Please … who are you?!” she says, nervously clutching a familiar umbrella, her face dominated by a large pair of sunglasses and a green shawl wrapped about her head. “Go away! Do not use our names … for all I know you could be one of them … David, do not let him use our names … Oh … !”

She speaks of being assaulted by people she suspects were hard-line Ahmadinejad thugs, disguised as protesters, whom she says, “called me ‘bitch’ and ‘whore’ and grabbed me by the wrists,” before threatening to kill their daughter. The exposed portions of her face are shiny with a combination of sweat and (maybe) tears, her features contorted in an expression of panic.

“I’m past being afraid,” says Kazi with a stern wave of his hand. “Let them do what they will. Use my name.”

“No,” she says. “David, please don’t …” Yet before she can finish, he silences her with words I cannot understand, prompting his wife to grab their daughter — a curly-haired girl of about 6 or 7 — and walk away.

Kazi shakes my hand, smiles and follows after them. I just sort of stand there, wondering what in the hell I just witnessed, when behind me the crowd of 60 has completely disappeared, leaving only an empty swath of Muhammad Ali Boulevard sweltering in the heat of the day. Everyone has gone, even the LMPD patrol car that had been camping out to keep the peace.

All that remains, oddly, is the spectacle of Fourth Street Live: white-collar workers walking to and from their designated lunch destinations/places of employment; bums ambling toward oblivion; a rock band setting up equipment on a stage in the middle of the street, laughing wildly and smoking cigarettes. Everything is relatively quiet and peaceful, the gentle roar of traffic punctuating the din of conversations overheard at any of the innumerable air-conditioned patios, where dudes in Polos and designer T-shirts chat about whatever it is that dudes chat about while drinking domestic beer. Yet this symbol of much that is wrong and empty and dangerous within our culture had — for just a few short hours — played host to some of our nobler, rarer impulses.