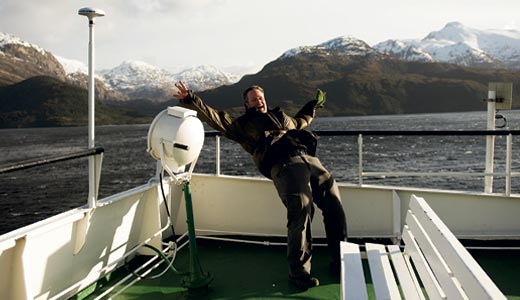 Since leaving Louisville almost nine months ago, I have seen, touched, tasted, smelled and heard so many things that it feels impossible to sum up my experience in writing.

Starting in Louisville in October, along with Jerry — my now infamous 1971 Volkswagen Beetle — I drove north to Chicago, then turned directly south, splitting the U.S. to the tip of Texas. After a three-day hassle at the border and paying a hefty bribe, I left the comforts of my country and continued south.

As I drove through Mexico I drank copious amounts of tequila and danced with mariachis. I toured Belize, where I hung out on secluded beaches with the Garifuna; Guatemala, where I avoided the hot lead of a machine gun shootout just outside my hotel room door and spent a beautiful morning watching the sun come up over the ruins of Tikal.

Or El Salvador, where I got lost in the traffic-jam capital of the world: San Salvador, in the heart of gangland. Or Honduras, where I was robbed four times by corrupt police officers; Nicaragua, which I loved but more or less just drove through; Costa Rica, where I relaxed in the lap of luxury and took a break from my Central America mishaps; and finally Panama, where I drove through the most beautiful coffee plantations, drank the best coffee in my life and photographed Travis Pastrana and the other crazies from “Jackass” filming their antics on an abandoned military air base.

The party really started after Central America. I shipped Jerry to Manta, Ecuador. After meeting him there I drove through the jungle and into the mountains, where I met my good friend Carlos Larrea and discovered the Chagras. After a couple weeks photographing these horsemen, it was clear that my subject for the remainder of the trip was going to be the vanishing cowboy culture throughout South America. Peru didn’t have much in the way of cowboys, although it did offer up some of the most beautiful and surreal landscapes on earth and the best ceviche I have ever had.

Once out of Peru and in Chile I learned what driving was really all about. It took me more than three weeks to drive from northern Chile through Argentina to the end of the world: Ushuaia. Once as far south as I could drive, I decided this was where I was going to stay and search for the ever-elusive Gauchos and Baqueanos of Patagonia. My quest ended up dumping me in Puerto Natales, where I met the right people and was introduced almost overnight to all the cowboys I could find time to photograph. I took to the mountains on horseback, destroying my backpack in the process, and photographed until I couldn’t ride anymore from the pain or feel my fingers from the blistering cold.

Finally, I met a man named Max Salas. Max has a passion for the Gauchos and their way of life that could only be outdone by becoming a gaucho (which Max is doing) and living in the mountains on horseback. Max and I have started a project searching for Coco Ruiz, an infamous outlaw Gaucho living somewhere in Patagonia. Unfortunately, this project couldn’t be finalized during my first visit to Patagonia. I plan to return as soon as I can muster the funds and track down this legendary bandit.

For the past couple weeks I have been spending time relaxing and catching up on some much-needed rest in Santiago with Max’s family. Jerry is on his way home over the high seas and as hot as I hear it has been in Louisville, I am looking forward to being home in the ’Ville among family and friends. Most of all, I’m looking forward to riding my bike along River Road and on out into Prospect.

Anyone want to go for a ride?