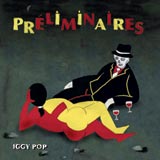 Feel free to argue over who invented punk rock. Iggy Pop certainly was the first major figure to live and breathe the punk lifestyle. So why should we want to hear him singing an Edith Piaf signature tune and other oddities?

First, he’s Iggy. After all he’s given to music and all he’s survived, he earns points just for showing up at the studio and completing the session in one piece. Second: He didn’t hide this jazz croon under a “more Iggy-appropriate” arrangement, nor did he hide himself behind a sweetening, “racing-Keith-Richards-to-the-grave” voice. Third: It’s a concept album. They demand some stretching.

But wait. He’s also pretending this is a soundtrack, and the short album takes a lot of the liberties given to those: semi-repeated numbers, lyrical over-explaining … heck, I’m surprised there’s no padding instrumental. This set fully delivers on only a handful of tracks, which reveal some sophisticated variety from the original angry snarler.