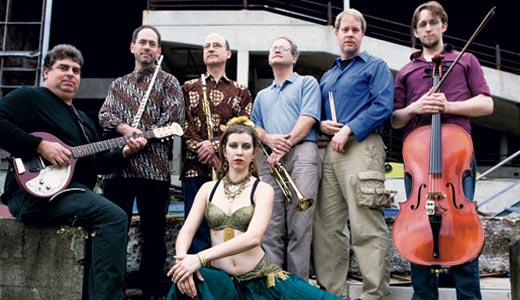 They’re trying to assemble an ensemble by getting cooperation from individualists who won’t settle for the bland and steady. Have you ever seen an avant-garde musician who’s well fed and knows that his upcoming gigs will pay the bills?

They’re in it for the love.

Ut Gret (rhymes with “toot suite”) is now a sextet, but the number and nature of participants has varied wildly over three decades. Somehow, amid the saxes and flutes of every stripe, didgeridoo and homemade percussion, the constant of the band has been the guitarist.

That’s Joee Conroy, a former Greenpeace activist and owner of a San Francisco record shop frequented by Carlos Santana. After he had to dig his instruments out of the 1989 earthquake, Conroy returned to the relatively stable ground of Louisville.

Gregory Acker didn’t need an earthquake to drive him back to town. His mother is a U of L faculty emeritus, and his wife is local visual artist Brenda Worth. Acker’s ways with woodwinds and handcrafting percussion instruments can get him invited out to opportunities like the Asian-Pacific performance exchange at UCLA. “But I prefer to bring art in,” he says, while answering the door to a visiting dancer from the Ivory Coast. Acker’s a fervid advocate for community arts programs and works with Arts Council of Louisville and other organizations.

He’d like to be helping to build a community-based venue that could provide a more reliable stage for his band. “But that’s always the case for someone who wants to bring in something off the beaten path,” he says, shrugging at how funds that are supposed to promote creativity instead quickly head off in tried and true directions.

Acker gets some solace from the musicians he’s with now, though. “You can’t go wrong by going with the extremes with Ut Gret,” he says after showing off one of his favorite instruments. It’s a tromba marina — a huge wooden contraption with a vibrating bridge. Played with a bow, it generates “a brassy buzz” that was just the thing for orchestrating behind madrigals a few centuries ago.

Gary Pahler might seem a bit more of a solid character, if not quite mundane. He’s the drummer, after all — not that Ut Gret go in for prolonged passages of steady beats, but Pahler doesn’t see much that’s strange in his musical career path. “I crossed paths with Joee in the mid-90s. We formed a group with [Ut Gret reedman] Steve Good called Arch Analysts. It lasted a couple of years, and then I decided to devote myself to The Web. Once that band went on hold, I got with Joee again. I brought some eclectic music with me. Some Raymond Scott … unique tunes that I thought would be good for them.”

The drummer doesn’t see much of a challenge getting audiences to relate: “People will find something in the set they’ll be able to latch onto.” But if he’s got to take a break for himself, he might head over to the TV studio (where he’s producer of KET’s “Louisville Life”). And he’s got another set of drums to sit behind — with the eight-piece afrobeat ensemble Coco Yam Band (playing World on the Square in Corydon on Aug. 8).

Band founder Conroy could also no doubt find other willing musical partners — but when he talks about his favorite gigs, he’s sharing memories of this Ut Gret lineup. For example, “‘In C’ at the Jazz Factory with a packed house. We had Tim Furnish of Parlour and a string quartet with us.” Opera singers also helped out on that arrangement of Terry Riley’s minimalist classic.

Conroy also can’t stop thinking about what’s around the next corner: “Playing WorldFest, this is going to be our third year, coming up on Sept. 5. We’ll have a really unique show for that. The last time we did it, we did a ballet. Just a little overly ambitious for a set that had to be done in less than an hour.” For Labor Day weekend 2009, it’s terpsichorean collaboration again — this time, belly dancer Ruric Amari, who’s appeared with the ensemble several times before.

Another return engagement of sorts is coming up the following month. At midnight, Oct. 30, Ut Gret will play a live soundtrack (which they’re still writing) to a showing of the classic silent film “The Cabinet of Dr. Caligari” at U of L. They’ve previously taken on this challenge with “Metropolis” and “Nosferatu,” which drew big crowds and rave reviews.

The breadth of the projects is testament to Ut Gret’s current lineup (including recently added cellist James Vaughn) achieving Conroy’s original vision: “What I tried to do with Ut Gret was create … an exploratory band. We started out as a free-improvising group, because improvisation was so exciting. And the longer you do that, the more exciting it becomes to start doing compositions that set off these different kinds of timbres and textures.”