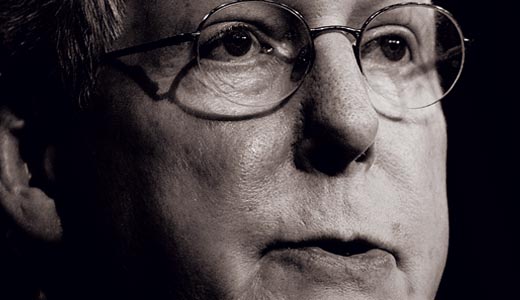 Lest you think Mitch McConnell is the least interesting person in the world, Louisville author and C-J columnist John David Dyche comes along with the first major political biography of the Senate minority leader and Kentucky’s Republican honcho. His DNA is part sphinx, part King Cobra — and all conservative, although you might be surprised where Mitch has been willing to compromise.

LEO: I wanted to start out by thanking you for the mention in chapter one, the nod to LEO’s Mad Magazine/Alfred E. Neuman cover.

LEO: Thank you very much. We got a kick out of it. Tell me why you wrote this book.

JDD: Obviously he’s achieved a level of national prominence that’s been rare for Kentuckians of either party, being only the second elected Kentuckian to lead their party in the Senate, so that’s one. He’s probably the critical man in converting Kentucky into a bona fide two-party state that’s lasted over time. Kentucky’s had spasms in the past in which the Republican Party was competitive, but I think while the move to the conservative direction probably would’ve happened without McConnell, because of McConnell I think it happened faster, more effectively and more enduringly than it otherwise would have. And thirdly, most of Kentucky’s political history has been written from the liberal side of the philosophical spectrum — John Ed Pierce and folks associated with the Courier largely — and I thought I would try to at least get something out there that came at things from the other side.

LEO: Name one thing you learned about McConnell that you didn’t know before you wrote the book.

JDD: Wow. There are a lot so I’ll try and find—

LEO: Yeah? How about the juiciest one?

LEO: He changed after he started winning higher profile elections. How much do you think he’s an ideologue and how much a political pragmatist?

JDD: The change I think came about gradually, after he experienced running his own races and knew that for him to be competitive in Kentucky, he was going to have to spend more in order to combat the hostile media. I think that it also came about, to some degree, as just a matter of intellectual growth. But clearly, there’s a pragmatic aspect to it.

You’ve posed what for me is the real question with not only that issue but much of McConnell’s career: Where do you draw the balance between pragmatism and principle, between political power and allegiance to ideas? All I could do is point out facts and express alternatives and turning points for readers to consider, because I don’t think anyone can ever authoritatively draw that line or reach those conclusions. I think with all politicians there’s an aspect of both — some that cling faithfully to ideals, like Woodrow Wilson, are ultimately unsuccessful in some of their big goals.

I point out in several instances where [McConnell has] made expedient votes or changes of position, not just on campaign finance but on issues like family leave and minimum wage and flag burning amendments, he’s changed positions. Sometimes he’ll concede that he voted out of political expedience. That being said, I think he does that probably less than the average politician.

LEO: It was interesting he was talking about being ashamed of what he did when he supported, in one of his first campaigns, collective bargaining for public employees.

JDD: He pretty much admitted that he never supported that, but he knew he was not going to be called upon to come through with it. There were a couple instances where he was pretty candid about having done something purely politically. I’m sure that he didn’t acknowledge all of those to me, but at least he did acknowledge some of them. I think that’s a reflection that he feels more secure now where he is, and he can afford to be honest about the times when he’s made those coldly calculating compromises.

LEO: I was surprised at how candidly both you and McConnell talked about his political ambition — it was clear from the beginning he sought to ascend whatever elective office he was in at the time, and used the offices — and political causes — accordingly.

JDD: He really did, and he admits that, I think most forthrightly, after he’s re-elected to Jefferson County-Judge in 1981. He’s all about running for the U.S. Senate. All about it. I think the running of the office was left to staff, the county-judge office.

LEO: You write about how McConnell learned early on not to align himself too directly with his party. Now he’s the minority leader.

JDD: That’s been a real interesting process. He knew early on that being aligned either with the party or with others in the party could be politically harmful to him, and there are several examples of that, from both running for county judge here — the first time he didn’t align with anyone else, and the second time he did and he almost got beat, and I think he learned a real lesson about that.

Once he’s in the Senate, he’s very open about the fact that he knew it would be to his benefit — and Kentucky was still a more Democratic state at that time — to have instances where he was separated from Reagan. As popular as Reagan was, he knew that it would still be to his long-term advantage to have some occasional distance.

Yet, as you correctly observe, that was an instrumental technique. Once he did get secure and once he achieved Senate leadership, he’s now pretty much all about party fidelity.

LEO: Yeah, he’s a true believer in party politics at this point, right?

JDD: I think he’s always been a believer in party politics, but was willing and, to be honest I think he was perceptive enough, to realize that to serve the higher goal, he was occasionally going to have to be savvy about when he would compromise or deviate in the short run in order to get where he wanted to be in the long run.

LEO: As minority leader, McConnell has really embraced his role as obstructionist to the Democratic agenda. Why is he always saying no?

JDD: I think it’s two-fold. I think he views it as the constitutional role of the Senate, and especially the Senate, given its procedural rules, and that he truly believes that sometimes the best thing that government can do is to stop something from happening rather than doing something. However, especially the Congress that ran from ’06-’08, when he first became the minority leader, while he said no a lot, and really frustrated [Democratic Majority Leader Harry] Reid a lot, if you look back, they ended up getting a lot of important things done. He did move the Democrats toward his position, but yet they ended up passing quite a bit of significant legislation, especially in the national security area but on several other things as well. So sometimes saying no is just a means of getting something shaped more to something Republicans can accept.

LEO: What do you think prompted McConnell’s evolution from a self-described “relatively conservative” early Mitch to his current, more orthodox conservatism?

LEO: You’re not saying he did that purely for political reasons.

JDD: I don’t think it’s purely for political reasons, but I think he did see that the country as a whole had moved. Over the course of his career, I don’t know the national polling, but I would just think that the nation as a whole was moving rightward, and he both saw some wisdom in that but yet he also saw the necessity in it.

LEO: What does a post-McConnell Kentucky Republican Party look like?

JDD: That’s a great question. I’ve been wondering lately whether the case can be made that the McConnell domination could be harmful to the Republican Party in the long-run, because it’s maybe hindered the development of the next leader. That’s just a theory and it hasn’t played out yet, but I could see it as a possibility. I think that you run the risk of having outright confrontation between the social conservative wing and the bigger city economic wing. We’re seeing that to some degree with the slots battle, we saw it to some degree in the Northup-Fletcher primary, we’re also apt to see it if Bunning and Grayson end up against each other. With a few exceptions, McConnell, kind of like Reagan nationally, was able to bridge the gaps because success will overcome a lot of those divisions. It’s those divisions that tend to come out when there’s not an overwhelmingly successful person at the top. I think that the party is, like the party nationally, is in danger of perhaps fragmenting into ideological groups. It’s just got a history of that. The Nunn-Cooke gubernatorial primary back in ’67 had aspects of that to it.