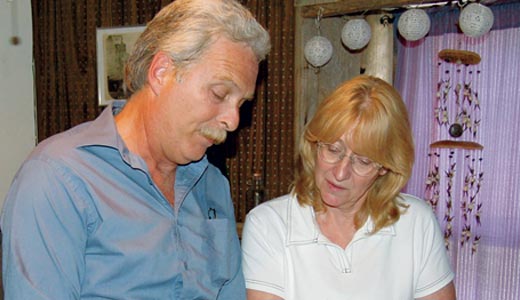 Inside the Blue River Café, a charming eatery that from the outside looks more like a hardware store, Mark Woods and Cara Beth Jones sit side-by-side in a dimly lit lounge, rummaging through a heap of paperwork.

The co-chairs of Concerned Citizens of Crawford County have spent the past three months knocking on doors, gathering signatures, passing out yard signs and compiling bundles of research documents in their campaign against the construction of a planned $90 million biomass-to-electricity incinerator in their rural haven, about 30 miles from Louisville.

“When we first heard about it, it was bright and cheerful. They’d be hiring all these people, produce all this electricity and bring all this money to the county — it was wonderful,” says Woods. “When we did our own research we found out it wasn’t that clean after all.”

Although biomass is advertised as a clean and renewable energy source that would spur economic development, the company’s promises have not dissuaded fears that the incinerator could have harmful effects on residents’ health and the local environment. The tourist town has struggled against the multi-million dollar energy company at every step, which has put southern Indiana in the middle of the clean energy debate about biomass fuel.

Besides what Woods calls a “terrible location” — less than a mile from the scenic Blue River, a popular canoeing destination — residents are mainly troubled by the company’s own emissions calculations. In its application for a state air permit, Liberty Green estimates that the southern Indiana plant would release up to 245 tons of nitrogen oxide and 226 tons of carbon dioxide a year, just below the threshold of “major polluter” in state regulations.

Though the biomass process is advertised as cleaner than coal, some residents fear those emissions levels could potentially release hazardous plumes and contaminate water in their scenic community. Through their own research, Woods says, the community has learned that a handful of biomass incinerator operators across the country have been accused of using all sorts of unsavory combustion elements to fuel their plants, including tires, solid waste and sewage sludge.

Liberty Green’s representatives have reiterated at every public meeting regarding construction of the plant that they have no intention of burning anything other than biomass materials, in this case solely wood.

“From the days of the caveman we used wood to heat and build our homes. It is a renewable resource that we’ve used for centuries and centuries,” Ott says. “I think it is a bit overblown. Biomass is very viable and renewable.”

Like solar panels and windmills, biomass has been touted among various solutions to America’s energy crisis, using biological material such as wood, alcohol fuels and animal matter to generate energy.

Wood-based incinerators, like the one Liberty Green proposes to build in Milltown, use leftover wood materials from logging, sawmills, furniture manufacturing and storm damage that can be converted into electricity.

What’s being debated in Congress and what has divided environmentalists is the question over where biomass facilities are getting their resources to burn, and whether they are doing so responsibly. It’s a concern shared by some Crawford County residents.

In 2008, the Canadian Ministry of Environment gave Lafarge North America Inc. permission to burn tires in its biomass facility in Ontario. Citizen groups protested — and won when they took the energy tycoons to court, a legal battle that shed light on the dark side of a practice that’s touted as environmentally friendly. American environmentalists fear loose regulations and enforcement mean biomass could turn out to be the new coal.

But Josh Dorner, a spokesman for the Sierra Club, says it’s a stretch to compare biomass to the coal industry, although there are concerns about promoting the new technology as a green bullet to the country’s energy crisis.

“Biomass can be a real net benefit if it’s done correctly,” he says. “We believe biomass can be an important tool if done under the right criteria and conditions. It can be a good thing or a bad thing. If done right, then it’s something we’re very supportive of.”

In Kentucky, the biomass industry has been at the forefront of the state’s energy agenda. While coal is still king, the state has two biofuel plants and two ethanol plants in operation. Liberty Green’s facility would be the first of its kind in Indiana.

Frank Moore, director of Kentucky’s division of biofuels in the Energy and Environmental Cabinet, says biomass technology is still developmental and state use is minimal, but the Bluegrass will be headed for additional production in the future if the Obama administration’s support for alternative energy continues. The problem with the biomass industry is that it hasn’t educated the public about its benefits, he says.

“The standards today and ability to control the solution has improved significantly,” says Moore. “It’s a total quantum change in the way we do business. We have the ability of producing all of our transportation fuels and our own power within Kentucky using natural resources.”

But residents in Crawford County believe they’ve done their homework. Presently, the fight with the biomass developer is tied up in paperwork, with Indiana elected officials and state agencies reviewing the matter.

Liberty Green has submitted its air permit application to the Indiana Department of Environmental Management, which will outline specifics of the project, including emissions limits. The agency says residents can request a public hearing once the review is complete.

Concerned Citizens of Crawford County, meanwhile, have lobbied their county commissioners and state legislators to step in and demand both a federal impact study and binding contractual commitments from the energy group. In response, elected officials — including the lieutenant governor — have voiced support for the plant, but are considering whether to ask for further study. If given the green light, Liberty Green could break ground as early as 2010.