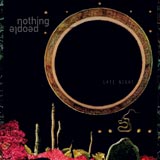 As far as careerist schemes go, naming your band Nothing People and titling your first album Anonymous has to be pretty high up on the list of bad ideas. Yet California’s Nothing People’s lack of such ambitions is refreshing in an age where seemingly every band has a marketing plan. Thankfully their music is unique enough for them to be noticed. Whereas their debut mined proto-punk in the vein of Chrome or Public Image Limited, Late Night presents a bleaker, lonelier vibe (hence its title). Some of its simpler songs don’t even seem to feature the entire band but still reveal an emotional complexity lurking beneath the surface. While Nothing People are seemingly hard to know, so far it’s been worth the effort.