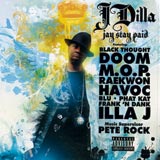 When I die, and my family and friends begin to sift through my belongings, they will find several folders of writings no eyes but mine have ever seen. Will what they read resonate with them? Will they even notice what they’ve found before hitting the shredder? Will they read and then shred, regardless of their feelings about the words?

Max Brod, Franz Kafka’s friend and confidant, promised to burn all of Kafka’s manuscripts, published or not, upon his death. Brod lied, and the world is a better place for his betrayal.
Legendary producer Pete Rock and Jay’s mother sifted through many dozens of unreleased beats to collect Paid, and while the material may not have an impact in the way of a “Metamorphosis” or “The Trial,” I am happy with its release: a fair split of instrumental and vocal tracks, including appearances by Black Thought, DOOM, Blu and Raekwon, while Pete Rock did the final mixes. The Roots’ leader has perhaps the most shining moment in “Reality Check,” a story-song using familiar names from reality television to push the narrative. Overall solid, not my favorite Dilla, but my neck is still sore from a few of these tracks.