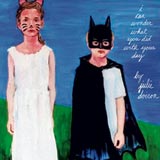 I Can Wonder … is a refreshing collection of songs from Julie Doiron that runs the singer/songwriter spectrum. She swings from pixie-esque hippie chick to gritty alt-rock grrrrrrl to mellow folk crooner — in the two-second gap between songs. With Fred Squire and Rick White, Doiron finds a versatile but cohesive sound that runs fluidly throughout the album.
Her lyrics are idiosyncratic and observational without coming off as insincere or droll. Each song permeates with an unshakable and inherent sense of hope without irony. She does this all without being sappy or overly dramatic. “Nice to Come Home” is so heartfelt and sweet; it kinda makes me wish I was the guy she wrote the song for. And “When Brakes Get Wet” teeters on quirky while shining a big bright beam of optimism over everything in the room.