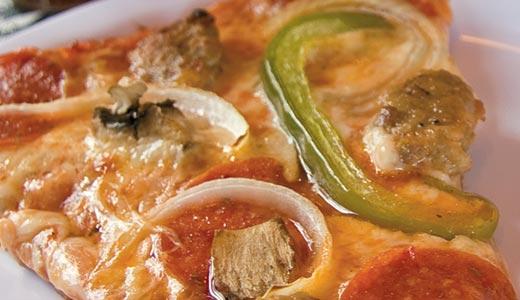 Pizza originated in prehistoric times, food experts say, when Stone Age tribes pounded wheat grains into a coarse batter and baked rough rounds on hot stones. Then they would top this primitive flatbread with whatever roadkill or gleanings were available. They didn’t call it “pizza,” but we think they probably called it good.

Tomatoes and cheese weren’t added for a few millennia, but by the time pizza as we know it was created in Naples and emigrated to the New World in the Ellis Island days, aficionados were surely already fighting over whose style was best.

Locally, folks who’ve tasted the joys of New York City pizza engage in a constant quest to find something akin to the Italian-immigrant style of pie that’s sold on almost every street corner in Gotham. It’s not an easy quest, as Louisville’s own pizza form (perhaps best demonstrated in the mile-high Impellizzeri pie) has earned a strong following in its own right.

Nevertheless, the quest continues, and when I heard that Perfetto Pizzeria had recently opened in the Plainview quarters last occupied by the short-lived Slice of NY, I rushed eastward to check it out.

They’ve spruced the place up a bit, but it still has the feel of a New York street-corner pizzeria dropped into a suburban Louisville shopping center. The walls are dark forest green; the floor is faux red brick. A gallery of old black-and-white photos adorns the walls, and black-and-white oilcloth covers the tables. A little white cupboard at the back holds plates and cups, adding a nostalgic family kitchen feel. The staff is warm and welcoming, service is cordial, and the pizzas have a New York accent, even if the owners, I’m told, hail from Wisconsin.

Pizza is available by the slice, lunch hours only, at $2.89 plus two bits per topping.

Whole pies are $11 (for a 12-inch medium), $12.75 (for 16-inch large) or $15 (for 20-inch extra large), plus 75 cents, a buck or $1.25 per topping, respectively. Toppings feature most of the usual suspects, including anchovies, plus meatballs, an offbeat but very Italian option. Specialty combinations ($14.50-$21.50) include the “House Favorite” with sausage, pepperoni, mushrooms, green peppers and onions, “The Works,” with just about everything, and a veggie pie.

Italian-style sandwiches bulk out the menu, including such goodies as Italian sausage or meatball “bombers” and Italian beef. They’re all $5.95, 50 cents extra for mozzarella.

Heartier family-Italian fare with salad and bread is available most evenings, including such goodies as spaghetti and meatballs ($7.75, daily), lasagna ($9.50, Wednesdays) and ravioli ($9.50, Saturdays).

But this is a pizzeria, not a ravioliteria, so we stuck with the flat, round stuff and found it as close to the New York City model as any around town.

The crust is hand-tossed  — I could see the guy behind the counter flipping it. The black metal oven doors look like an old-fashioned wood oven, but the proprietor admitted that it’s fired by natural gas.

The slices are good size, made to be folded over lengthwise so you can eat it walking down the street. For true Gothamesque authenticity, a slice would be served on a square of foil on a paper plate, but the nice, white earthenware plates don’t fold.

The pizza is discreetly topped with tangy tomato sauce and indiscreetly blanketed with thick, molten mozzarella. A sausage slice added big, meaty chunks with a distinct anise-like whiff of fennel, a good thing in Italian sausage. Pepperoni was, well, pepperoni.

The crust was appropriately thin and bread-like, but I wish they still had the wood oven, as the gas fire just doesn’t seem to have the horsepower to deliver that classic crisp, golden brown pie freckled with charred spots. Still, if it’s not quite a match for Brooklyn’s iconic Di Fara’s pizzeria, it’s not far short of The City’s ubiquitous Original Ray’s.

Three slices, a Coke and an iced tea made more than enough to fill us up, and came to a recession-priced $13.52, plus a three-buck tip for friendly, careful service.

Quickly told, Tony Boombozz Pizza is developing a “Brooklyn Pizza” that’s also a fair match for the real thing. Served only as a full, extra-large pie to ensure folding-size slices ($12.99 for cheese), it’s currently available only off-menu at the Springhurst location. Luigi’s at Seventh and Main offers a good replication of NYC pizza, as does Spinelli’s on Baxter, which hails from Philadelphia but isn’t far off the New York City mark.