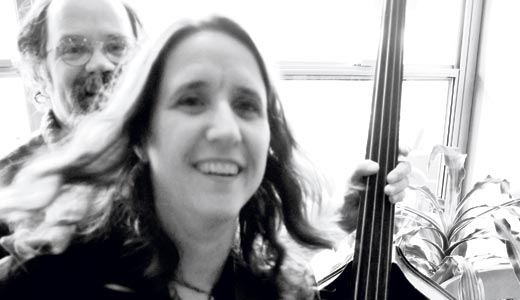 Be careful who you’re friends with — they might make crazy suggestions, like asking you to move to San Francisco on a lark.

That’s what happened to Gayle Lynn.

You won’t find an ounce of regret in this folk-country songstress. Her day-job focuses on a children’s bluegrass band and traveling around the city to middle and elementary schools teaching “Music In Movement with Gayle,” a freelance music instruction course.

Teaching allows her, once in a great while, to steal away for a few tour dates with her band, The Hired Hands.

Lynn’s newest, Just Came Around, is the result of 20 years bayside, following a stint student-teaching in England. “I felt like I hadn’t been anywhere in my own country even,” Lynn said, when a friend who was San Francisco-bound put the bug in her ear. The Oakland A’s and San Francisco Giants were enjoying pre-steroid-scandal bliss. The time was ripe.

Lynn’s oldest sister started all this music business by giving her kid sis a guitar. Post-relocation, Lynn appeared at a few open mics at The Owl & Monkey and The Bazaar Café. At one gig, a man named Tom Meshishnek approached her and said he liked her material, had analog recording equipment in his basement, and — bonus — would record her for free.

Lynn wrote primarily children’s songs, and in the 1990s released Toodala: Front Porch Favorites, a disc of bluegrass covers and some originals, and worked that record with a group called Toodala Ramblers.

In 2005, she founded The Hired Hands with life partner and stand-up bass player Tom Drohan. The band is 180 degrees from Just Came Around, which leans adult. Her website’s catch phrase, after all, is “Bourbon-soaked songs for the soul.”

“The thing about the Bay area here is that there’re tons of old rock guys around,” she said. She didn’t look hard to find other players. Slide guitarist Rik Elswit toured for 20 years with Dr. Hook, which made the cover of Rolling Stone in 1973 (issue 132, to be exact).

Joining The Hired Hands is folk revivalist group Misisipi Rider (apologies to the state on consonant conservation). Turn on their track “Much About Love” if you’re in the mood for a little romantic vengeance play.