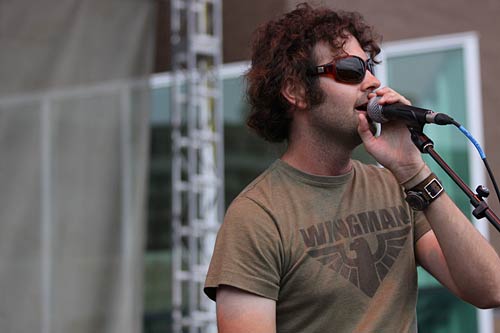 Christ, after three days of chronicling my adventures I feel like Doogie Howser, but instead of a teenage doctor I’m a 27-year-old music writer, go figure.

The shady afternoon was perfect for a third full day of music. The temperature was just right, and the sun could barely make its way through the overcast cover. We couldn’t have asked for better weather today had we thought about it.

As the sun set, it smeared a neon glow through the low canopy of clouds and all over the downtown sky. When Widespread Panic took the stage for a second night, a radiant orange dusk was just falling over the crowd. They were going to be on tonight; even I could tell that – from the first song they were far more compelling than last night. They played a sick rendition of the J. J. Cale classic “Ride Me High” that would make even the biggest jamband skeptic think twice about dismissing these guys. Although it was during that song I heard the sloppiest bass solo ever from a concert stage; but I guess that’s their appeal … it’s live, warts and all.

Tonight instead of two sets – the band did one long set … and by an hour-and-a-half in, I wish they had taken a break. The middle of the extended set fell flat like the dribble at the end of pee. It was at this lull in the action, that downturn toward boredom when Backyard Tire Fire took over for me. Their combustible brand of southern rock should’ve reduced Panic’s stage to nothing more than a pile of smoldering embers. These guys tore through some glorious covers like Warren Zevon’s “Lawyers, Guns, & Money” and Neil Young’s “Cinnamon Girl.” And by the time they closed with “How the Hell Did You Get Back Here” I was sold to whatever these guys were selling. By the time Backyard Tire Fire was finished, Widespread had risen from their lull like a phoenix from the ashes – and was back into the rockin’ set they had started with, and ultimately ended on a high note.

So after two nights of Panic, I admit, I kinda get it. It might be the fact that I was in a different “mind-set” tonight than last night. Regardless, I get it. A Widespread Panic show: where a $35 ticket and a half-sack of schwag you can make the whole night last all day.

The Avett Brothers were moderately disappointing to me. I love their modern twist on Appalachian folk music, and live music junkies have been telling me how great they are live for years. Well they were alright, they sounded good and all – but it wasn’t the life changing live show I had been led to believe I would see. But I only say disappointing in the sense that no one could possibly have lived up to the expectations that were built for those guys in my mind. When they played the beautiful heartache of a tune called “Murder in the City” I was almost bummed that the sun was still up. I can only imagine what it would’ve been like for that song to just float off into the abyss of the evening ether.

Yonder Mountain String Band played a fun set of modern bluegrass that filled the belvedere with joy. Their stomping sound, and the good natured banter from its members, helped these guys fit perfectly into a mid-afternoon time slot perfectly. And Umphrey’s McGee played a hell of a set considering they were on stage in another city at four o’clock this morning, drove here, slept for four hours and was able to make it on stage here in Louisville by 3:30 in the afternoon. Kudos, to them and their crew, on that one.

Gringo Starr was a pleasure to watch. Their spacey take on southern rock made for a really fascinating set on LEO’s East Stage. Not to mention, all the band members were trading instruments back-and-fourth and switching up vocalists from song-to-song. At the beginning of each song you never knew which would be singing and who would be playing what. And The Instruction was a solid, hard-rock band with an infallible ear for pop hooks – this is definitely a band that will probably be smeared all over modern rock radio stations in the very near future.

After three days of total musical submersion at Forecastle, I’m sold. Fuck middle-of-nowhere farm festivals – urban music festivals are the way of the future. Swirling stage lights rising from the depths of a city skyline just seems to make sense.