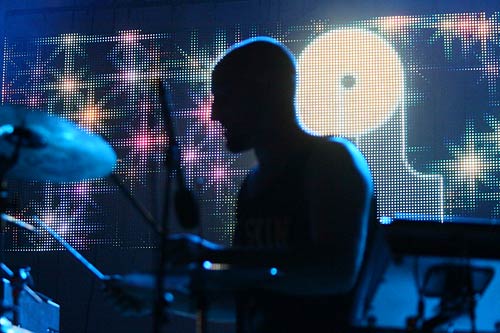 The heat was either less notable or simply more tolerable after yesterday. But the crowd grew exponentially overnight. On account of this onslaught, the smooth operating at the door of yesterday was long gone today.

There were hippies and patchouli everywhere.

But by now, I know to expect the Xerox of a Xerox of a Deadhead when Widespread Panic is playing anywhere within earshot. To their credit, hippies create a friendly and embracing atmosphere where anything goes – unprovoked strangers light your cigarette for you and then, out of courtesy, pass you a sparked joint.

Widespread worked their way through an impressive, yet unremarkable set; the stage lights twirled, the glow sticks flew, and the beach balls bounced overhead. You saw the dancing girls in thrift store dresses, smelled the unmistakable aroma of weed, and embraced the cool night air as a soft breeze blew off the sleeping Ohio River.

In all, it was a Widespread Panic show.

Admittedly their jams aren’t as noodling or meandering as many of their Jam Band contemporaries. They still play with a certain amount of emotion without slacking on the knowledge that they can get away with anything and it would be deemed brilliant by their loyal masses. It’s a similar quality they share with The Allman Brothers (who they’ll be touring with later this year, by the way), in that they play music, real music – they aren’t there to be the Mad Scientists of music. This is something I deeply appreciate when being subjected to the jam-band scene for an extended amount of time.

The Black Crowes played a very unique set compared to ones I’ve seen in the past. The set was mostly filled with deep album cuts and new songs from their upcoming album. The played none of their energetic live staples, except for a rousting rendition of “Jealous Again.” Although they did play two of the stand out tracks off of Warpaint, a grossly underrated album from last year – “Oh Josephine” and “Movin’ on Down the Line.” On the whole, the set was pretty mellow by Black Crowes standards – they kept everything right in mid-tempo, and strayed very little from there. But the voice that originates in the throat of Chris Robinson will keep a crowd spellbound for hours, no matter what. With Luther Dickinson in top form, there was no reason to ever look away from the stage. An aside, though, I think as Rich Robinson gets older, he is slowly morphing into Russell Crow – it’s eerie … really.

Dead Confederate has a distinctive quality to them. They’re almost a hard-rock/southern-rock band that seems out of place surrounded by hippies, but somehow right at home. When they first went on and through their first couple of songs things were tense, until it became clear they would be embraced by Widespread’s eagerly waiting fan base. I think what saved them was when they played a song that seemed to channel an edgier Radiohead from a bygone era (I know that description is neither hard rock nor southern rock – but hey, it is what it is).

The New Mastersounds fit in perfectly with their surroundings. This British, instrumental jamband kept the crowd rolling through their entire set. With no words uttered from the stage (except between songs of course), the crowd was in the palm of their hand as they took turns showcasing each member’s talent the whole time.

Strolling up the sidewalk to LEO’s East Stage, Asheville, N.C., band Afromotive played a jam-heavy set, guaranteed to enthrall the gathering crowd. I might be biased, though, because I’m a sucker for any band that includes a saxophone and bongos – the pairing creates an organic sound I can hardly resist. The Deep Vibration put on a brutal, grueling set (even more so if you account for the heat), that I couldn’t take my eyes off of them. They’re a solid blues based trio that tore their way through a great set of original songs, and ripped through a killer version of the Sam & Dave classic “Money.” Royal Bangs were a band I couldn’t really buy into, I wasn’t sure exactly what I was listening to. Was it indie? Was it hard rock? Was it industrial? I don’t know – maybe I’m too simple in musical tastes, but I like to be settled if I’m going to be in this for the long haul; and they just didn’t settle me.

In all honesty, between bands I would walk around and inevitably find myself in one of two places. First, I would stand and watch the BMX course, where pro-bikers were doing tricks and occasionally falling all day – and obnoxious M.C.’s were trying to hype the menial crowd (I still think whoever has the microphone makes up the names of each particular trick off the top of his head as they happen. I mean, really, who has ever heard of moves like Potato Salad or The Dining Room Table?). If I wasn’t there, I would be cooling off in the fountain beside the “Techno-Tent”, as I affectionately call it. As I’ve well established this is not my particular blend of music but I thoroughly enjoyed what both Paul Dailey and Dory were doing in their respective sets; the latter was even spinning actual vinyl, a rarity these days). But Three (that’s the guys name, Three), he was every thoughtless, robotic and soulless cliché that defines electronic music for most people. I wanted to break his drum machine and feed it to him while grinding his cheek into the turntable.

It’s late. I’m exhausted. I am preparing myself mentally and physically (the accumulative two day blisters on my feet) – for Day 3. I’m sure it will come and go before I ever knew it was here – but from this side of the hump, it still seems daunting (in a good way of course).