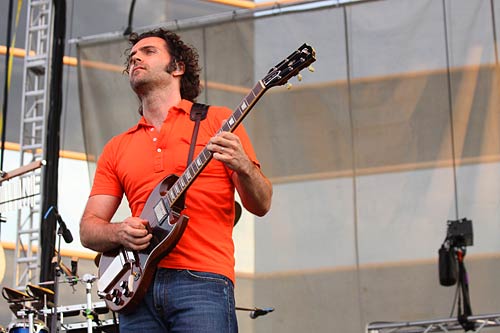 It was hot. It was gross. It was amazing.

By the time the first day of Forecastle ’09 kicked off, the sun was high in the sky, set somewhere between a simmer and a boil. Every face had been smeared in heat; every brow was glossed by a thin veneer of sweat; and yet, no one seemed to notice or care.

This is the eighth year for the steadily growing festival – and this is by far the biggest growth it has ever seen. From last year’s bill packed with hip-hop has-beens, this year is packed with A-list headliners and promising up-and-comers. The flawless execution of tonight goes to show that the Festival is obviously in capable hands. Food and drink prices were by no means exorbitant, and the causes that filled the booths were informational without being confrontational. The overall lay out was perfect – all three stages were so close you could literally walk back and fourth between the bands with no more than two minutes of travel time. And the stages are setup in such a way, with all speaker cabinets aimed at the river, that one stage never bleeds over onto another.

West (main) Stage:
To start with … Cage the Elephant. My God, folks. If you have not heard this record yet, it is entirely your bad. Hop off the My Morning Jacket bandwagon and hitch a ride with these guys, there’s plenty of room left in my stagecoach, I promise. The record is brilliant, and their live performance was enigmatic. Lead singer Matt Schultz (who almost passed out on stage from heat exhaustion) can carry a live performance as if he’s an earnest jumble of Julian Casablancas and Iggy Pop. These guys shred incendiary renditions of songs off their debut like “In One Ear,” “James Brown,” and “Back Against the Wall” effortlessly. Even if these guys were dull performers, the structure and natural charisma of these infectious songs won’t allow an audience to get bored … ever. And the band is fearless, letting loose of their rapidly climbing single “No Rest for the Wicked” right in the middle of their set; that’s a ballsy move for any up-and-coming act. And closing with a killer version of Pavement’s “False Skorpion” was absolutely breathtaking (although I admit I’m a little bias, I adore Pavement, and I love seeing someone cover them well). Seeing these guys felt like we were witnessing a moment of rock n’ roll history in real time. This band will be everything that it wants to be … and I can’t wait.

The Whigs are a good band with a great story. Their performance was strong, tight, and in most ways impressive. The only problem is they look and sound like every indie-rock band that has broken in the past decade. Live, the songs don’t distinguish themselves that much, it all sounds it came from the Paul Westerberg school of lo-fi rock: thin. wiry chord structures beneath infectious hooks. Their harmonies were on point and their singer’s voice is as strong as they come, the hardest part of these guys is that it just doesn’t sound like anything you haven’t heard somewhere before.

When Dweezil Zappa took the stage with Zappa Plays Zappa (a stop on their Tour de Frank 2009 tour), I wasn’t entirely sure what to expect. But now I know. Honestly, I had much more fun listening to Zappa Plays Zappa than I ever did listening to Frank Zappa himself. It sounded as if Dweezil mashed-up his father’s catalogue with Phish’s catalogue. A performance of “Nanu from the North” was a nice surprise I don’t think any of us saw coming. The slew of hippies danced, and a cloud purple haze lifted to the skies – a pyre that Frank himself would have been proud of I’m sure.

Pretty Lights put on an interesting show … although admittedly I’m probably not the person to discuss them. Ambient, instrumental, electronica is not exactly my forte. Their light show was crazy cool – but the music was trance-like and indiscernible from one track to the next, however, everyone else seemed to be loving them … so what do I know?

And I still don’t understand the necessity for a live drummer and a drum machine.

The Black Keys are slowly morphing into The White Stripes … or into Jack White at least. Their show was brilliant, raw and never deviated from a blues centered rock show. Sometimes they were channeling Zeppelin, sometimes channeling The Allman Brothers, while other times they sounded like R.L. Burnside on steroids. They blew through almost all of their critically acclaimed album, last year’s Black and Blue, as well as a couple of old songs, and a couple of new ones.

As is the story with most second stages at festivals like these, they are jam packed with bands you most likely know nothing about … history, catalogue, etc. So I’ll do my best.

While the sun was up, the Second Stage hemorrhaged with the hard rock sounds of The Last Straw and The Lion’s Rampant (the latter of which was actually turned up so loud it defied reason, good taste, or pleasure). But as the sun went down the Hackensaw Boys took the stage. They were a fun mix of country, bluegrass, and jugband as they sent their hillbilly vibes out over the river. With fiddles, mandolins, and banjos (along with the standard band oriented arrangement of bass, guitar, and drums) they kept their crowd somewhere between a foot tapping and an all-out hippy-shake.

Last for the night was Jason Isbell & The 400 Unit. This guy is one of my absolute favorite road warriors out there right now. With his ear for soulful hooks, while singing of heartbreak and blue collar hardships, it’s a crime that he isn’t bigger than he is. Hailing from Alabama, Isbell and his band laced their set with songs off both of his solo albums, as well as tracks from his tenure with Drive-by Truckers (the cover of Talking Heads’ “Psycho Killer” is always a nice addition to his sets). “Grown” is a wonderful treat to hear live, with its rolling build-up into an infectious chorus, the song just lends itself to being played in front of an audience. And the heart wrenching “Goddamn Lonely Love” sucks the air out of the crowd when he sings: “Sister, listen to what your daddy says/Don’t be ashamed of things that hide behind your dress/Belly-up and arch your back/Well I ain’t really falling asleep; I’m fading to black.” Isbell is one of the most captivating performers on any stage right now, but tonight he was having repeated sound problems with feedback from his microphone. It’s a problem you would think the sound man should have been able to fix with a quick slide of a knob, but it just didn’t happen. Beyond semi-regular squeal that blew when he sang, Isbell was as on point as ever.

One day of Forecastle down, two more to go …