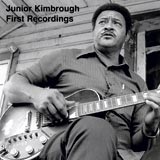 Charlie Feathers called him the “beginning and end of all music,” but Junior Kimbrough had to begin somewhere: so he did in 1966, with these six tracks, an audition for the Southern soul label Goldwax. He’d been playing his particular and peculiar brand of heavy trance-blues for years, but his first recording session didn’t amount to much. “Too country,” said Quinton Claunch, Goldwax’s engineer and co-owner. You can’t hold it against Claunch — his biggest sellers might have been from the sticks, but they sang modern R&B. Kimbrough’s back-country, hill-country proto-soul-blues sounded anything but contemporary, although it was never quite heard before and hasn’t been equaled since. Unreleased till now, these short bursts of young Kimbrough — like a boozy Lightnin’ Hopkins playing in a tarpit — offer thrilling insight into the roots of his ineffable sound. Essential.