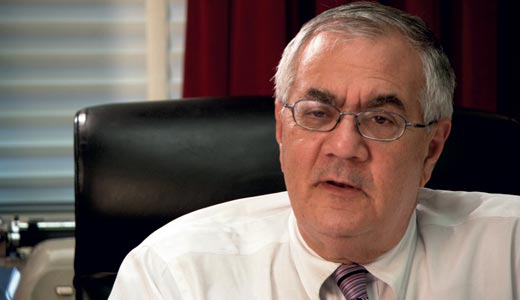 The closet can be a dark and lonely place. It can also be a dangerous one — not only to oneself but many, many others. Especially if you’re a gay politician, forced to keep the door closed to stay in your party’s good graces. Forced to vote against yourself and the community with which you belong.

“Outrage” is an excellent, eye-opening documentary by filmmaker Kirby Dick that examines this issue and takes a look at current and past closeted politicians who perpetuate anti-gay legislation and policy.

The film begins with a scrolling statement: “There exists a brilliantly orchestrated conspiracy to keep gay and lesbian politicians as closeted as possible. This conspiracy is so powerful, the media will not cover it, even though it profoundly harms many Americans. This film is about politicians who live in the closet, those who have escaped it, and the people who work to end its tyranny.”

The story then cuts, naturally, to former Idaho Sen. Larry Craig during his 2007 trial for disorderly conduct for soliciting sex. Craig, a Republican and an outspoken opponent of gay rights who continually voted “no” on issues including domestic partnership benefits, hate-crime bills, gays in the military, gay marriage and support for HIV/AIDS research and treatment funding, pleaded guilty after being caught soliciting sex from a male undercover police officer in a public restroom.

“It’s very often that the self-hating gay people who, in the closet, are the most vicious toward other gays and lesbians as a way to deflect attention from their own orientation,” David Catania, an out Washington, D.C., city council member, says in the film. “The fact that Sen. Craig and those like him can engage in homosexual activity one minute and try to write us out of existence the next — there is no punishment harsh enough as far as I’m concerned.”

“I’m going to tell people who these horrible traitors are,” says Rogers in defense of his aggressive reporting style. “I felt it was time for me to start reporting that as hypocrisy. Not outing people who are gay, but reporting on individuals who are working against a community that they then expect to protect.”

“People who are gay and are in public service seem to think they’re immune from being exposed, and they go out. They go to bars, they go to clubs, they even go to bathhouses,” says Jim Hormel, the first openly gay U.S. Ambassador, in the film.

“Outrage” then sets its sights on Florida Gov. Charlie Crist, a 50-something bachelor whose campaign was shrouded with rumors of homosexuality until he married Carole Rome in 2008, which some suspect was a political move. On Nov. 5, 2008, Florida, with Crist’s approval, added the gay marriage ban to the state constitution.

“I’ve watched decent people struggle with coming out and being unable to do so. The closet, especially in the midst of a cultural war, suffocates the integrity of decent people,” says Patrick Guerriero, former executive director of Log Cabin Republicans, in the film. “My hope is that this next generation of young American leaders doesn’t have to be suffocated in the midst of a cultural war that hopefully has ended by the time they reach Washington, D.C.”