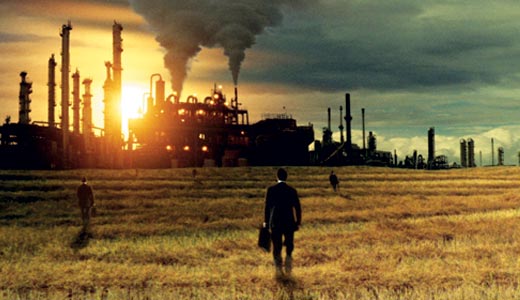 Leave it to a bunch of hardcore investigative journalists to yank down the steadfast veil that separates American consumers and their food industry. Never before have I been fearful of stepping foot inside a grocery store. Now, after seeing “Food, Inc,” Robert Kenner’s exposé on where exactly our food comes from, I can’t even breathe easy in the Popsicle aisle.

Of the many topics covered in the eye-opening documentary, which comes on the heels of a few years’ worth of popular foodie journalism of a similar ilk, the most interesting was the segment on corn overproduction in America — and the fact that the cheap staple is found in everything from ketchup and cheese to batteries and diapers. The most disturbing was the meat-processing portion — a sad, disgusting and very real glimpse into chicken, cow and pig slaughterhouses and production plants.

“The way we eat has changed more in the last 50 years than the previous 10,000,” the film begins. “There are no seasons in the American supermarket. Now there are tomatoes all year round, grown halfway around the world, picked when they were green, ripened with ethanol gas. Although it looks like a tomato, it’s kinda the notion of a tomato. It’s the idea of a tomato. In the meat aisle, there are no bones anymore. There is this deliberate veil, this curtain that is drawn between us and where our food is coming from. The industry doesn’t want you to know the truth about what you’re eating, because if you knew, you might not want to eat it.”

Writer/director Kenner presents a nice balance of experts like Michael Pollan (“The Omnivore’s Dilemma”) and Eric Schlosser (“Fast Food Nation”) with the working-class men and women in the fields and farms and courtrooms that this industry affects — and essentially owns. The film examines the fact that, unlike at the turn of the last century, our food supply is now controlled by a handful of corporations that tend to put profit ahead of consumer health. And the government agencies that we expect to have our back (USDA, FDA, etc.) really don’t — as politics, money and power further blur the line between public safety and profit.

The chicken farms in McLean County, Ky., that are featured contract mostly with Tyson. Chicken production is factory labor — a science, one farmer says. “If you can grow a chicken in 49 days, why would you want one that you can grow in three months? It’s more money in your pocket.” Using a variety of hormones, antibiotics and other appetizing chemicals, farmers are able to grow chickens faster and larger than before — even make them with larger breasts to satisfy our penchant for white meat.

Many times documentaries of this nature tend to preach to the choir and barely make a dent in mainstream America. My hope is that “Food, Inc.” reaches a larger audience than just the ones who will head over to Village 8 after the Saturday morning farmers markets. Before you sink your teeth into another Big Mac, do yourself a favor and take a bite out of the larger picture. “Food, Inc.” has already done the legwork — it’s up to you to sit back and digest.