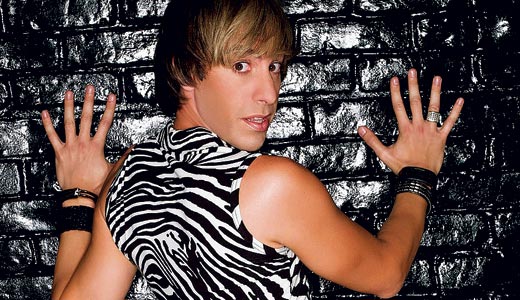 I was transporting The Package in a rented Ford Windstar, moving south on the San Diego freeway. Approaching a border patrol checkpoint, The Package placed a call to his lawyer. In a tone of voice that would not have been out of place at a Cambridge admissions interview, The Package spoke matter-of-factly, in a proper English accent: “Lawrence, I’d like to put a criminal defense attorney on hold today. There’s a distinct possibility that I will be arrested or shot sometime after lunch.”

The man riding shotgun was, in fact, about to put himself in front of a firing squad. Yet he calmly ended the call and seamlessly merged back into the character of Borat.

Sacha Baron Cohen can seem immune to the anxieties one might feel before a “heist” (director Larry Charles’s term for our process of collecting footage). On this day, we’d arranged a taped interaction with the Minuteman Project — a border militia with a hands-on approach to illegal immigration. In a scene ultimately deleted from the 2006 release, Borat’s distant visage appears before an unwitting Minuteman post. His suit jacket is twisted into a turban to ward off the desert heat. A broken muffler is slung over his shoulder the way one would carry, say, a rocket launcher. We had not warned the Minutemen of Borat’s arrival and had no idea how they might react to this new strain of Mexican Taliban.

As filmmakers, we had a backward production philosophy of facilitating fiasco. Whether we were hijacking rodeos or running naked through hotel lobbies, the thrill of not knowing what we’d encounter became par.

Although I was not involved in the follow-up film, that old sensation returned to me often during a buzzing midnight screening of “Bruno” at Tinseltown Thursday night.

In “Bruno,” the eponymous lead character — a young, Austrian homosexual who hosts the fashion show “Funkyzeit” — finds fame, loses fame, then seeks to win fame back. Despite a familiarity with the material and set-ups that sometimes waft of earlier work, I found myself blindsided several times by the film. “Bruno” is a faster, glossier experience than “Borat.” It employs weapons unused by its predecessor, like wardrobe designer Jason Alper, who concocted a hundred jaw-dropping looks for the character. (Borat owned a single gray suit, a purposely musky $50 garment that has followed Alper and Baron Cohen since their “BBC 4” days.)

For all the flash of “Bruno,” there is a trade-off, mainly in the way the two films are paced. Borat was allowed more rope. Perhaps because his impairment is cultural and mostly forgivable, this “loveable” fish-out-of-water affords greater space to dwell in the set-up. The punch lines seem to come later and harder. Because so much is revealed about Bruno the moment he walks into an interview, the character seems forced to induce quicker climaxes. Borat will sweet-talk us. Bruno is more of a (ahem) blast in the face.

Baron Cohen once explained to me that his characters find life whenever a punch in the mouth seems inevitable. What would be a scary prospect for most is, in fact, comedic nirvana for Baron Cohen. He delivers some of his best stuff when a cringing cameraman is resisting the urge to slowly back out of the room. The image of Borat marching toward a border post, trying to deceive an armed militia into taking the offensive, typifies what is so special about this entertainer. This is a comic who will put his life on the line for a big enough gag (i.e. Bruno informs the head of a terrorist organization that bin Laden looks like a homeless Santa).

During the raucous finale, I was left to marvel, “so this is what an R-rating looks like in 2009?!” Spoiler Alert: In this scene, Bruno and Lutz — a jilted lover/personal assistant — co-opt an Ultimate Fighting cage to work out their differences. The seething fight-crowd hurls chairs at the oblivious (and trapped) men. I took this for what it was obviously meant to be — a metaphor for battles past and the dedication of former personal assistants. Thanks, Sacha.