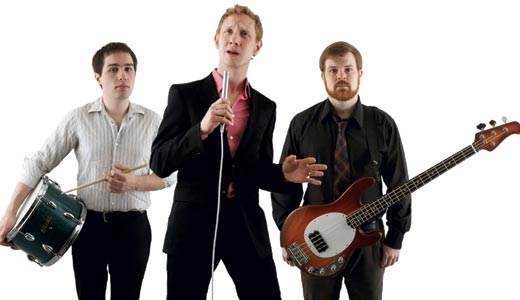 Deloreans’ frontman/guitarist Jeremy Perry really digs the crooners of ’50s and ’60s rock and roll. Take one look at the back of The Deloreans’ first album, Love Outrageous, and you’ll understand just how much.

With a pink button-down under a solid black suit; a silver, American Bandstand-ish mic; and an earnest, lovelorn expression triggering memories of Tom Jones, Perry looks ready to bring the heat on “It’s Not Unusual.” One look at the album and there is no mistaking what dimension you’ve wandered into.

These guys bring not only the image of the era, but also the youthful innocence. Love Outrageous is a listen away from Franz Ferdinand and The Killers, but Perry’s lyrics tackle simple subjects like boy-meets-girl with the heartbroken weariness of Roy Orbison. The production is low-rent, as Perry recorded most of the songs himself, but his prowess as a songwriter makes up for it. Songs like “Scream” mesmerize with a spooky, Animals-like energy while “Do It Like You Mean It” is so simple and charming that it winds up being unforgettable.

Spirits dampened when drummer Evan Pouchak moved to Los Angeles, but Perry and bass player Bill Willis are ready to soldier on with Squeeze-Bot drummer Megan Samples. They hope to tour later this summer.

LEO: The album has a real ’50s flavor to it. How much of an influence was that type of music on this record?
Jeremy Perry: We stole the drumbeat for “OOO … Ah” from the Phil Spector song “Be My Baby.” Some of the songs from back then are so strong that you wouldn’t change anything — not one chord, not one beat, nothing. I wouldn’t pretend that our songs are as good as those guys, but I really like a lot of the sounds from back then as well as what those guys wrote about.

LEO: What kind of approach did you take in songwriting on this record?
JP: I tried to approach really simple subjects, like guy-meets-girl, but do it with some bizarre metaphor like a panther on “Attacked by a Panther.” Really I just wanted to put something new and different out there that was as good as anything else coming out in Louisville.

LEO: You guys have been playing for a couple of years and are still building your following. What are some of the things that you think keep people coming back to your shows?
JP: On a local level, more important than probably anything else is for people to just know you are nice guys. I talk to the audience a lot in concert, or people will call out songs and we’ll play them. It’s important to interact rather than act like rock-star assholes. We aren’t like that, and it is important that people don’t perceive us that way.