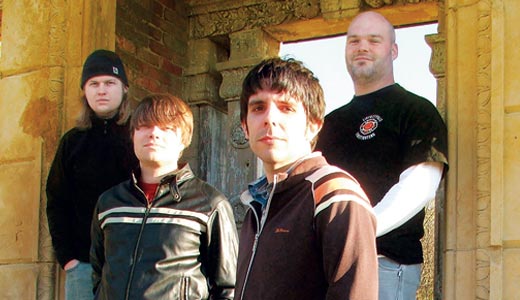 After 12 years and thousands of albums sold, The Muckrakers are disbanding. It might be easy to write off their brand of pop-rock as staid, bland and predictable. Then singer-guitarist Rob Carpenter opens a vein.

LEO: Why?
Rob Carpenter: It sounds cliché, but it was time. I wasn’t having the delusions of grandeur anymore. I had hope. I would close my eyes and dream of these giant crowds. I didn’t dream about that anymore. I stopped dreaming about it. I said let’s just call it. I think everybody else is ready, too.

LEO: What was that like for you guys moving to “the big city”?
RC: It was really difficult because, in Bowling Green, we were big fish in small pond. Everybody knew who you were, and there wasn’t any competition. If you wanted to go see a live band on a weekend night, your choices were Nappy Roots or us [laughs]. It was pretty amazing at first to see the number of musicians and also the quality of musicians. It was hard to get a gig. We took a horrible, every-Wednesday-night [gig] at the Hideaway Saloon. We signed a piece of paper that said we’d play every week for $10 and free beer. We played everything we could; we played all the time — terrible shows — but we didn’t care, we loved it. To us, playing Wick’s for 50 people was the equivalent of playing The Palace. I don’t know why we were all so bloody gullible, and how we convinced ourselves that it was fun. But we did, and we loved it.

LEO: What was that transition like for you in terms of starting out jamming in dorm rooms to getting a deal and meeting with the “beautiful people”?
RC: We’d have people come to shows, and there were telephone calls. Nobody ever wined and dined us to that extent. Occasionally someone would call — “Hey, how’s it going? Would you consider wearing leather pants?”

At the time, the dream — now it’s not really the same — but the dream was to have a record deal, and that’s all that mattered. I grew up memorizing Rolling Stone’s “Encyclopedia of Rock ’N’ Roll.” I knew how every band signed their contract. We had always made this joke that we’d get matching tattoos. Our evening would end with us all back at home watching “Sportscenter” highlights. There wouldn’t be any blow or hookers.

LEO: There’s a perspective that you play music for the love and it’s not necessarily about money, it’s about making art and sharing it. What was it like actually trying to carry out a dream that you had?
RC: It wasn’t touring. Touring is the easy part. You’re gone. You’re doing it.
I didn’t lose [the feeling] until after the touring. You come home; you catch your breath. The easy thing is to say that my wife [Angela]‚ and I had our first child, but that really wasn’t it — which is a horrible thing to say — but that wasn’t it, because I love my child regardless. I don’t think that there’s a rule that says you can’t be in a band and be a good father. By this point, there was a process of the separation between myself and John [Ruby, founding guitarist].

LEO: What brought that about?
RC: It was a long time coming.

LEO: Did you part on good terms?
RC: No, we didn’t. We parted on about as bad terms as you can part on. My greatest flaw is I hate confrontation, which is not a good thing if you’re trying to run a business. Things kept getting worse and worse, and he didn’t travel with us when were supporting the record. I don’t fault him. I’m not mad at him. That took a lot, not out of just me, but Brian [Meurer, bassist] and Dave [Kidd, drummer] as well. Whenever you lose a friendship like that you never really get over it.

We started the record [The Concorde Fallacy] around the same time Label X started going under. The back-to-back of those two things started to hurt. The record just took a long time to make for reasons that were our fault and not our fault.
We started recording when we were still on the road, but it’s one of those things, “How the hell did two years just go past? How are we still in this position? Why am I still doing vocal takes?” I blew out my voice at one point. We couldn’t get into a studio for a part of it. Everything kept going wrong. Those rose-colored glasses, well, I took ’em off.

LEO: It seems like when a band breaks up now, maybe all they needed was a break and that somehow they can rise from the ashes. Do you see it that way, or do you think that phase of your life is over?
RC: I do have a blog, I hate the word blog, but everybody has to use it. I had a top 10 questions and responses. After a couple weeks of letting people see it, the most common question I got was, “Are you guys really done?” My response is you can never say never, because what if some octogenarian offers us $1 million to perform on his Dr. Moreau-esque island?

I’ve been waiting for this desire to pick up my guitar, write again or just play in my living room, and I haven’t had it. I can honestly, on one hand, count the number of times I’ve picked up the guitar this year. I won’t write off doing music again, but if I do it will be in a different avenue than The Muckrakers. I’m just gonna take a little while off and see, see if I get that urge to start writing again. That’s the saddest part to me, is not that the band broke up, it’s that I don’t have the urge to write. Being together for 12 years was awesome.

My dream wasn’t to be in a band. My dream was to be in this band. We fought, sure, but we had great, great times. I’m not sad that it’s over. It’s like graduating college. It really feels that way.

LEO: Do you think you’ll feel that way at the show?
RC: I voted against doing the show. The problem with the last show is a lot of things have to go right. I didn’t want a lasting memory of a negative memory going out. Dave, our drummer, was in favor of it. His argument: If 10 people show up, it’s saying goodbye to those 10 people.

I’m a big softy, and I’m not gonna promise I won’t cry. The next morning is gonna be really hard. Luckily, I’m moving three days later.